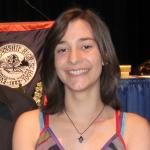 They call it the Pen & Press Tea, when the English Department at Evanston Township High School annually honors its top students in 25 categories, from reading poetry out loud to writing short stories.

The latter actually comes with a sizeable financial reward, provided by a men’s short story club in Evanston that pitches in private funds in the name of one of its members, now retired, who served on the ETHS faculty for 32 years.

At the ceremony in the ETHS auditorium Monday afternoon, the $600 first-place stipend in the second annual Bruce E. Mitchell Award for Short Story Writing, a competition open to juniors at the school, went to Dina Sinclair, while Graham Jordan and Jenny Kulb each received checks for $200 as runners-up in the contest, which this year attracted 22 entrants. 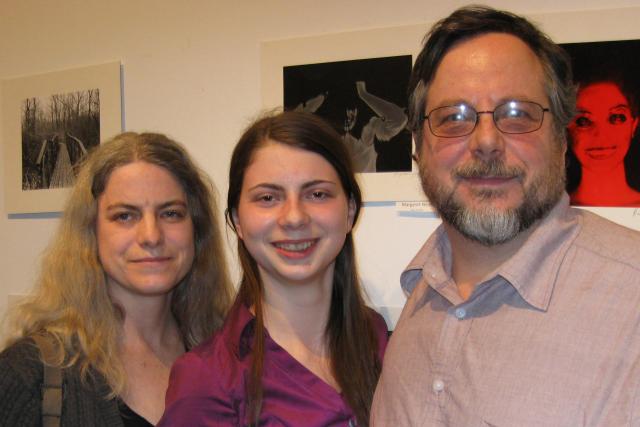 The entries are judged first by a three-person faculty committee in the English Department that forwards the six finalists to the short story club, which designates the winners after a discussion of the entries at its regular monthly meeting. The funds come from donations made by the club members to a special donor-advised fund within the Evanston Community Foundation.

Other top awards presented Monday were the Mary L. Taft Award to the Best All Around English Student, which this year went to senior Lauren Cooper, and the Barbara Pannwitt Freshman Creative Writing Award that was won by Alyssa Nichols.

Cooper, who was the winner last year of the first Mitchell Award, plans to enroll in the University of California at Berkely in the fall. 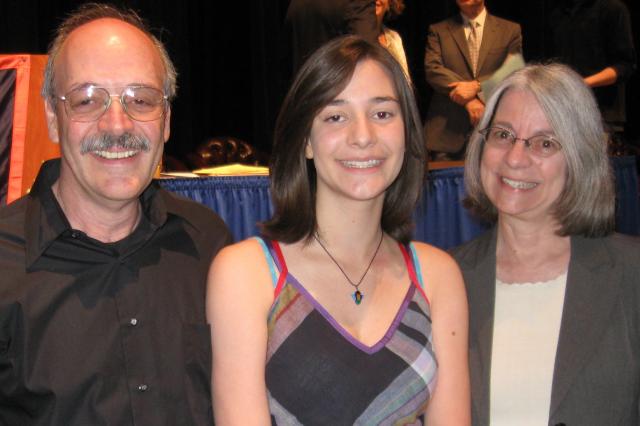 Lauren Cooper, selected as the Best All Around English Student, with her parents.

Among the other awards was the Joanne Ishkoff Humanities Award, won by Darcy Miller, the Peggy Dye Yearbook Award to Natalie Hoke, the Marie-Claire Davis Creative Writing Award to Emily Fishkin, and the Reque Journalism Award to Allie Goodman.