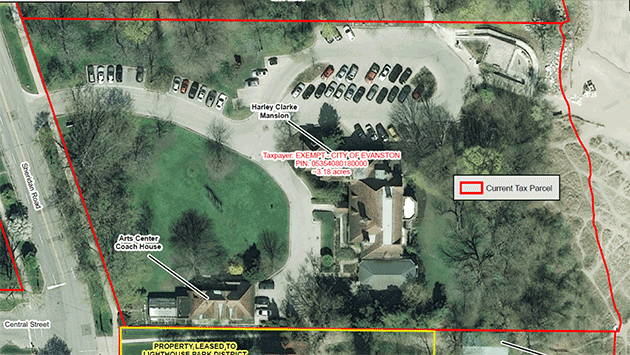 Asked to email ideas for what to do with the lakefront Harley Clarke mansion, 25 Evanstonians responded, submitting some 35 ideas ahead of Thursday night’s mansion committee meeting.

And the most frequently mentioned one was the very idea that aldermen rejected out of hand nearly two years ago in the face of an organized campaign of opposition — the boutique hotel project proposed by Col. Jennifer Pritzker.

Of course there’s been no recent sign that Pritzker or any other developer is interested in reviving the hotel concept, and the committee is still accepting suggestions at harleyclarkemansion@cityofevanston.org, so the final results are likely to change.

But here’s the tally of ideas so far after reading through the messages included in the committee’s meeting packet.

Then there were a three suggestions for other concepts that — like the boutique hotel — would involve sale of portions of the property:

But one other writer — without actually suggesting a use — insisted that the property should not be sold and no long-term lease should be signed either.

Several people offered diverse ideas for what would what appeared to be non-profit uses:

And one person offered an idea for a short-term use to raise funds — staging laser tag games there.

The committee, after refining its list of criteria for evaluating potential new uses, scheduled its next meeting for 7 p.m. on Wednesday, March 11, at the Civic Center.

It’s due to make a recommendation to City Council about what to do with the mansion by June 8.