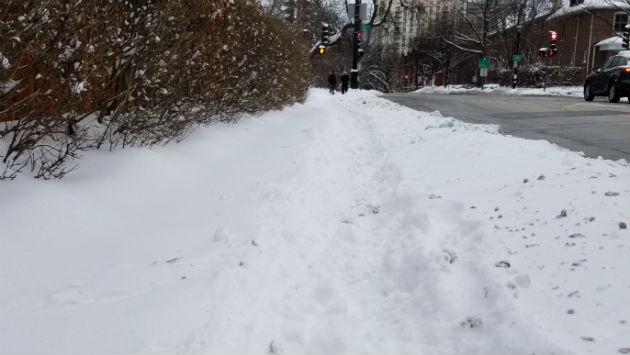 Evanston residents would have to shovel the public sidewalk in front of their property every time snow fell under a proposal city staff unveiled at Monday’s Administration and Public Works Committee meeting.

The proposal was a response to a request for action from members of the Transportation and Parking Committee who seemed surprised to learn during a November meeting that current regulations only require residents to shovel public walks after snow tops four inches within 24 hours and gives them another 24 hours to get the job done.

Oak Park and St. Paul, Minnesota, she said, require that snow be removed within 24 hours after it falls.

She suggested that Evanston should require that property owners remove any amount of snow or ice from sidewalks within 24 hours.

The city’s current policy had inspectors responding to 214 complaints in 2019. After a complaint is received, she said, inspectors visit the property within 24 hours and leave a door-hanger notice that the walk needs to be shoveled.

If they return after another day and find the snow hasn’t been cleared, they can issue a ticket that requires the owner to appear in the city’s administrative adjudication court.

Last year, she said, no tickets were issued.

The proposed changes would also require owners of corner lots to clear crosswalks out to the street at their corners.

She said the new policy would create safer conditions for sidewalk users and further the goals of the city’s Climate Action and Resilience Plan.

The A&PW meeting was running overtime by the time the snow shoveling discussion began and aldermen appeared generally supportive of tightening the rules. But Alderman Ciciely Fleming, 9th Ward, said she was concerned about requiring residents to clear crosswalks and Alderman Peter Braithwaite, 2nd Ward, said he believed the city should focus on targeting businesses and large residential buildings in the new rules, rather than individual homeowners.

The proposed changes are expected to return to the Council in ordinance form sometime later this winter.