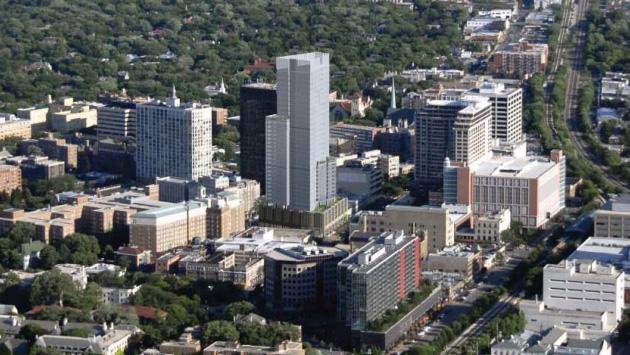 A 35-story downtown tower and a $255 million city budget are among the items on Monday night's Evanston City Council agenda.

Here's a look at those two topics and more.

The council plans to vote Monday night on whether or not to give developers of a planned 35-story condominium at 708 Church St. three year extra years to begin construction on the project.

The planned development was approved by City Council in a 6-3 vote in late March of 2009. At the time, and due to the suffering economy, the developers received five years instead of the standard three to begin construction.

If approved by City Council, the current proposed extension would give developers until Dec. 31, 2016 to break ground on the project.

Discussion and a vote on the proposal was tabled at the last regular meeting due to absences by both Alderman Dolores Holmes, 5th ward, and Alderman Peter Braithwaite, 2nd ward.

Approval of the fiscal 2014 budget and increased sanitation fees

It's that time of the year again.

Approval of the fiscal 2014 budget by City Council is slated for Monday night. The proposed annual budget totals nearly $255,000,000, and was initially published in mid-October, with public meetings and hearings held in the intervening period.

Adjustments to the proposed budget included a downward revision of a projected surplus from nearly $231,000 to about $170,000, and no city property tax levy increases.

And as part of the 2014 budget, city staff recommended the council also approve an increased sanitation service charge for 95 gallon refuse carts.

If approved, residents with 95 gallon carts will be charged an additional $3 per month. Those with the smaller 65 gallon containers will not be charged any extra for sanitation services.

Purchase of new computers and servers from Dell, Inc.

In a memo to the council from Assistant City Manager Marty Lyons and Information Technology Division Manager Jose Calderon, the city officials said the purchase would be "single source" meaning all the proposed items would come from Dell, Inc., which they said would "maintain continuity and compatibility with current network and technology infrastructure" and leverage the city's relationship with the company.

The proposed purchase will be funded with a remaining balance of about $156,000 in the city's fiscal 2013 IT personal computer equipment budget.

According to the memo, 75 percent of the city's 650 physical desktop computers are more than six years old and are unable to be upgraded to current Microsoft operating systems. From 2008 to the present, the city has only purchased new desktops on an as-needed basis in situations with "a severe impact to productivity" or if the PC failed and was unable to be repaired.

The proposal also provided for the implementation of virtual desktops, which would be operated by two physical servers with the ability to run 125 of these desktops.

Though the cost of 100 new desktops is covered under the proposed purchase, it does include the purchase of any new monitors.

City Council plans to vote Monday night on a proposed project to modernize four traffic signals on Dempster Street in conjunction with the Illinois Department of Transportation.

The signals include those located at Fowler Avenue, Hartrey Avenue, Shopping Plaza Drive and Dodge Avenue. The proposed project would interconnect the four signals and coordinate them with signals at Asbury Avenue and Ridge Avenue, which were previously modernized, according to a memo to the council from Director of Public Works Suzette Robinson, Assistant Director for Infrastructure and Engineering Homayoon Pirooz and senior traffic project manager Rajeev Dahal.

The total cost of the project is about $68,000, and IDOT plans to reimburse the city $51,000 upon completion, according to the memo. The initial cost of the modernization project and the roughly $17,000 which will not be reimbursed by IDOT will be funded through the city's Capital Improvement Fund.

Once completed, the project is expected to improve traffic flow for both pedestrians and vehicles, reduce energy consumption and provide faster access for emergency vehicles, among other benefits.

A proposed resolution to replace and extend sidewalks in conjunction with IDOT as part of the Safe Routes to School project will be up for approval by City Council Monday night.

Under the Federal-aid Safe Routes to School program, up to $250,000 is available to municipalities for infrastructure improvements to encourage and enable children, including those with disabilities, to walk and bike to school, according to a memo to the council from Robinson, Pirooz and Dahal. The program is managed and run by IDOT.

With guidance from IDOT, city and school staff along with PTA representatives created a School Travel Plan for Evanston. After the plan was approved by IDOT, city staff submitted a grant for just under $250,000 to the state transportation agency for the cost of the project, which includes sidewalk improvements for Dawes, Chute, Oakton, Washington, Dewey, Nichols, Lincolnwood, Willard, Orrington, Lincoln, Haven and Kingsley schools.

IDOT approved designs for the infrastructure improvements earlier this year, and, with City Council approval, will bid out the project for construction in 2014.