The architect of a proposed 49-story tower on the Fountain Square block told residents Wednesday night that Evanston is a role model for the future. 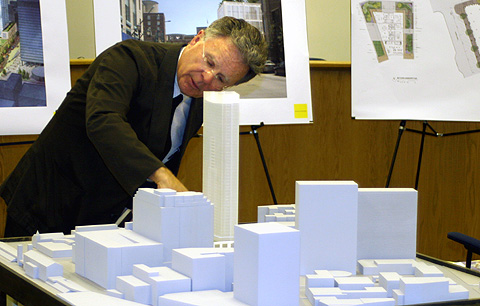 Larry Booth of Booth-Hansen Architects said that development here in recent years "has transformed downtown with enough residential density to bring restaurants and high-quality retail development to what is really a very compact downtown area."

"While the rest of the metro area has sprawled over past Aurora, Evanston has provided an alternative model for a healthy, walkable downtown with mass transit," Mr. Booth said.

"My generation says, I can walk to Whole Foods and Starbucks, what else do I need?" he added.

He said the new tower would be "an elegant residential building, visually light and delicate, that would combine an intimate pedestrian experience with high residential density." 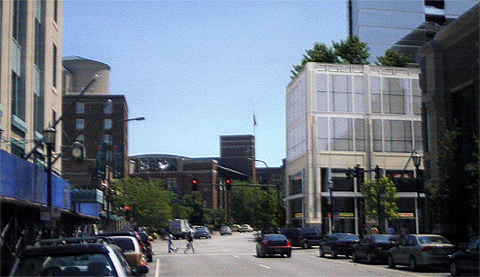 A rendering looking east on Church Street with the base of the proposed tower on the right.

He said the five-story retail and parking base of the building "is about the same height as Marshall Fields" and lower than the nearby Hotel Orrington.

Developer Tim Anderson of Focus Development said it would not be financially possible to redevelop the 708 Church St. site with just two stories of retail and office space — what’s on the site now.

"The residential development is what makes the acquisition possible," Mr. Anderson said, adding that it also provides a customer base for the retail shops. 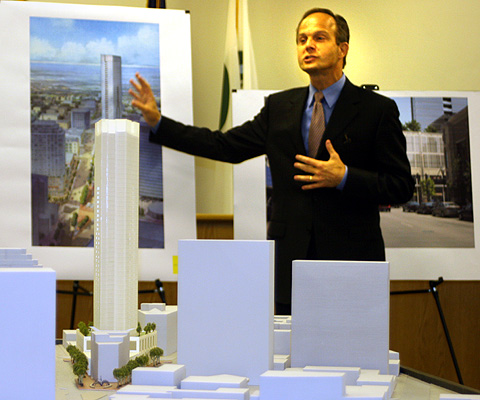 He said the project would provide diverse housing opportunities, from one-bedroom apartments priced under $300,000 to penthouses that would sell for over $2 million.

Mr. Anderson said the developers would contribute nearly $900,000 to the city’s affordable housing fund, rather than build affordable units on site.

He said high condo association assessments in "an amenity-driven building" would cause problems for owners of on-site affordable units. They wouldn’t be able to control the assessments because they would represent only a small percentage of the unit owners, he added, making the development "probably not the best place for affordable housing."

Jeanne Lindwall of 625 Library Place said looking at the new development from areas a few blocks downtown would be "quite a jarring experience." She said she can just barely see the top of the 25-story Sherman Plaza, from the ‘L’ platform at Noyes Street.

But Mr. Anderson said the new project wouldn’t be economically feasible at the same height as Sherman Plaza.

Developer James Klutznick said retail space in Sherman Plaza is now almost completely leased. Of 150,000 square feet of retail space, only about 3,000 square feet is left, he said, and several shops that haven’t opened yet are being built out. Evanston is getting "a critical mass of lifestyle center retailers — companies that don’t want to be in an Old Orchard-style mall," he said.

The project proposal falls substantially short of the number of parking spaces required by the city’s zoning code, but Mr. Anderson said the 1.1 cars per unit figure the developers are using reflects the reality of their experience with Sherman Plaza and other recnet projects.

He said that at Sherman Plaza the same parking space ratio left the developers with several spaces left over that had to be sold at a substantial discount because of lack of demand.

Alderman Cheryl Wollin said that the city is studying parking demand as part of its downtown planning process and expects to have a report before the City Council has to vote on the new tower project.

Both developers stressed their experience in the field, in addition to their joint development of the Sherman Plaza project.

Mr. Anderson said his firm built the Church Street Station condos downtown and has done other development projects in Evanston and elsewhere.

Mr. Klutznick said he was born into the real estate business — that his father built Park Forest in the late 1940s and developed Old Orchard in the 1950s. And that his firm also built Water Tower Place in Chicago and Copley Place in downtown Boston.

One resident of the Sherman Plaza development claimed that over 40 percent of the condos there are now being used as rentals by the original buyers. He said that was likely to hurt resale prospects.

Mr. Anderson said, "We’re learning from the experience at Sherman Plaza" and that in new developments they expect to limit rentals of units to no more than 25 percent.

"But you have to put this in the context of what’s happened in the industry overall. We’ve never seen before where there’s been such a lull in resale activity. You have people who’ve bought in Sherman Plaza who can’t sell their house in Winnetka. So they have to rent out the condo until they can sell the house," he said.

He added that while current inventories of condos for sale are high, less new condo inventory is coming on the market now, and so the overall inventory is being reduced.