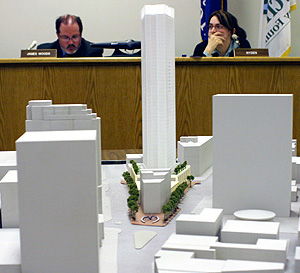 The developers of the proposed Fountain Square tower trimmed the building’s height in a new proposal for the project presented to the Evanston Planning and Development Committee this evening. 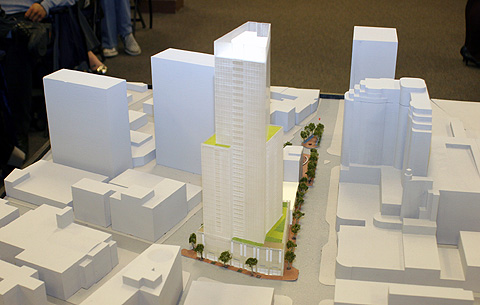 The new design calls for a 38-story building instead of the original 49-story proposal.

It would be 421 feet tall instead of the 523-foot-tall original proposal.

The new design has a smaller setback at the fourth-floor level than the original design and still has the 218 condo units proposed in the original.

The aldermen took no action on the revised plan this evening but scheduled two follow-up meetings.

The first, at 7:30 p.m. on Wednesday, April 30, is a session of the city’s Economic Development Committee at which city consultants are scheduled to report on an analysis of the financial aspects of the project.

The second, at 6:30 p.m. on Wednesday, May 7, is a special meeting of the Planning and Development Committee.

At that session the aldermen plan to hear 90 minutes of public comment on the tower plan and then present their own comments on it.

Despite the loss of height in the new design, the building, if approved, would still become the tallest in the metro area outside Chicago itself — it would top the existing record-holder, the Oakbrook Terrace Tower, by three feet.