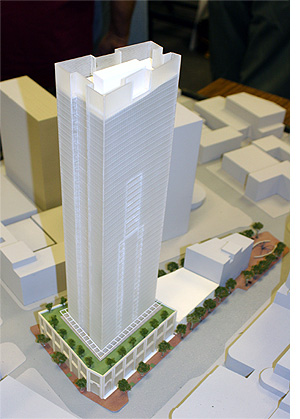 But some local merchants and service providers weren’t buying the victim role when they testified at the Plan Commission hearing on the project Thursday.

Daniel Kelch, owner of Lulu’s restaurant at 804 Davis St., said of claims high-rise developments have a negative effect on small businesses "nothing could be further from the truth.

He listed a string of local shops — some in business 10 or 20 years — that have moved into retail spaces in new buildings that opponents say would be financially out of their reach.

And he said even one of the stores expected to be displaced by the Fountain Square project, 57th Street Bookcase & Cabinet, has already found a new storefront at 604 Davis St.

He added, "I understand the financing when these big projects come along. Financial institutions are not going to give big money to developers based on the retail asperiations of a shoestring startup."

So, he said, there will be a mix of larger chains and small local businesses, "but not all chains are bad — look at Whole Foods or Barnes & Noble."

He said that in some cases local shops have replaced outposts of big chains that failed. "Retail is always fluid and changing," Mr. Kelch said, "and the independent business people of Evanston now how to seize an opportunity when they see it."

"The baseline cause of downtown’s success is residential density and more development happening downtown. That’s integral to the health and longevity of small merchants," he added.

Jeremy Kudan, a real estate broker focusing on restaurants and other commercial properties, said Evanston is well equipped to handled the additional people the tower development would bring and said it will provide additional revenue and visitors to the city’s cultural institutions.

Warren Walker, owner of Atmosphere Communications Inc., a wireless Internet service provider at 820 Davis St., said the tower project would help provide a vital environment in which businesses like his can grow.

He said that in his business he’s had the good fortune to see Evanston from the rooftops of tall buildings. "Evanston is beautiful," he said, "with the lakefront, a vibrant downtown and the neighborhoods all around."

"We can’t leave out any one of these elements if Evanston is going to make it in the 21st Century," he said.

Jim Marsh, who operates a marketing business, Grotto Communications, from his home at 821 Brummel St., said his business serves a lot of firms in downtown Evanston.

He said he’d been skeptical of the Sherman Plaza project, but said it’s the best thing that’s happened for his business. He said he has a lot of clients in the development and can park in the garage and walk to visit other clients elsewhere downtown.

"We’re not going to be losing business in Evanston as a result of this project," he said. "People who have a business here are going to want to stay and they’ll find a place to stay in Evanston" — whether downtown or in one of the neighborhood business districts.

But not all business owners who spoke favored the tower.

Michael Poulos, a condo owner at 1416 Hinman Ave. who said he operates several businesses in space he rents at 1734 Sherman Ave., said his businesses would lose traffic now generated by shops at 708 Church St.

He decried what he called speculative pressures driven by the prospect of a successful high-rise project that have driven up downtown property costs. The change "only benefit the landowners" while forcing office tenants to pay "ever higher taxes," Mr. Poulos said.

And Dr. Stamata Blanas, a dentist with offices in the Carlson Building who also lives downtown, called the Fountain Square block the "golden triangle" that she said would be destroyed if the professionals in the 708 Church St. building are forced to move.