Developers of the 49-story tower proposed for the Fountain Square block in downtown Evanston said Thursday night that they’ve reworked their plans to add 37 more parking spaces to the design. 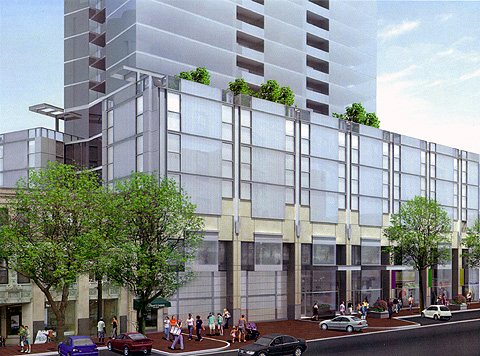 An updated design of the southeast corner of the tower base presented to the Plan Commission Thursday.

Halik says the designers were able to squeeze in the additional parking spaces  without change the height of the building’s base by adjusting the floor-to-floor heights in certain areas.

The plan still relies on the public Sherman Plaza garage and on-street parking to provide spaces for the two retail floors of the tower. The developers argue that they shouldn’t have to provide retail parking, since the existing 708 Church St. building on the site has no retail parking either.

The developers’ traffic consultant said city officials have told them that even at the peak hour from 3 to 4 p.m. on weekday afternoons, the city’s three garages still have a total of over 1,000 vacant spaces, although on-street parking is virtually 100 percent occupied.

Focus Development founder Tim Anderson said it is not financially feasible to place all three levels of parking for the project underground.

"We’ve built two buildings in town, and the water table is only about 12 feet below grade," which creates major problems, he said. In addition just the sheer construction costs and the delays required to build the hole "are very substantial."

He said the Chase Bank building has two levels of underground parking but only managed to accomplish that by having very low ceiling heights in the parking garage and raising the plaza around the building to minimize how far down they had to dig.

Focus Development Project Manager Justin Pelej said that while the tower proposal has only two loading docks, fewer than required under the city’s zoning rules, a review of dock usage at Sherman Plaza shows that more than half the time no trucks are in the docks there and another 35 percent of the time only one bay is occupied.

He said the developers would be able to schedule residential move-ins to eliminate any congestion problems at the loading docks at the new site.

Mr. Anderson said that while the developers don’t plan to ask for any tax increment financing assistance to build the tower, they will need some level of financial help to restore the landmark three-story Hahn Building next door and preserve it for use as Class B office space.

He said he expected to receive an engineering study within the next few days that will assess the condition of the building and better determine how much aid may be needed. In addition to TIF funding, the preservation project may be eligible for federal and state tax credits and other forms of assistance.

Mr. Anderson said that based on marketing studies he’s convinced the project’s condos will sell successfully, despite the current soft real estate market.

"We’re pricing at a point very similar to existing new construction in town and providing a premier building in a premier location," he said, adding that a number of lenders have expressed interest in providing construction funding — including the same team that funded Sherman Plaza.

Developer James Klutznick, responding to a question about whether the developers would be willing to kick in funding to take down the Fountain Square building and rebuild the plaza, said "I don’t mean to be impertinent or anything, but the answer would be ‘no.’"

He said the tower development would create incremental tax revenue that the city could use for whatever purpose it chose — including a possible expansion of the plaza. "It’s ultimately up to the city to decide whether it wants to do that," Mr. Klutznick said.