Developers of the proposed Fountain Square tower suggested reducing its base from five to four stories Wednesday as the Plan Commission wrapped up public comment on the project. 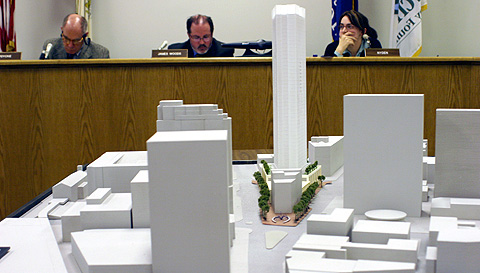 Commissioners Stuart Opdycke, James Woods and Johanna Nyden listen to testimony as a model of downtown showing the planned tower rests on a table in front of them.

Commission Chairman James Woods said the panel will vote on the plan at its next meeting Dec. 12.

Architect Larry Booth said the reduction in the height of the base would be achieved by eliminating the second floor retail space proposed in the original plan.

He said it was a response to suggestions from Woods and others that the five-story base looked too bulky.

The new design reduces the height of the base from 71 to 56 feet. Although the total retail space in the building will be reduced, Booth said that eliminating the need for a retail lobby and elevator area to reach the second floor would increase the available first floor retail space. 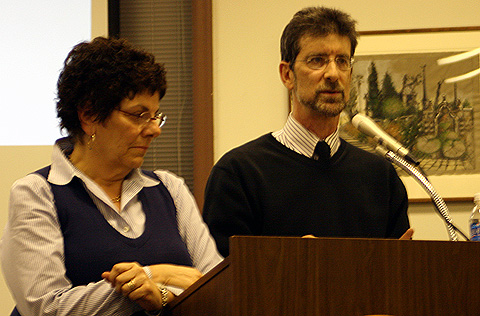 Michael Lembeck, who with his wife, Marianne, owns Williams Shoes and two other shoes stores in the 708 Church St. building that would be demolished to construct the tower, said he fears his business won’t survive if it has to move.

He said that he’s not personally opposed to tall buildings and recognizes that, from a business standpoint ,Williams Shoes would benefit from even more new downtown construction. "All those wealthy shoe buyers would be great for our business," he said.

He said the family-owned business has been in Evanston at various locations for nearly 54 years.

"We’ve had reasonable rents and have been able to provide for our families just fine," he said. "It’s hard to imagine being booted out."

Developer James Klutznick said, "We have met with Mike and Marianne on numerous locations. They’re looking at possibilities and we are. We’re trying to find a way to get them a good home for the medium and long-range future."

City Planning Director Dennis Marino added that the city has a business retention specialist on staff who would be happy to work with the Lembecks and other business owners affected by the project.

The plan commissioners turned back efforts by tower opponent Barbara Rakley of 2526 Grant St. to draw them into the debate over the City Council’s decision to hold a private meeting with the tower developers last March.

In the midst of a lengthy reading by Rakley of the state open meetings act and excerpts from newly-released minutes of the closed meeting, Commission Chairman Woods said "it’s not the purview of this commission to deal with that issue."

Commissioner Charles Staley said, "We don’t have any authority to change anything that you could bring up here" about that, and Commissioner Stuart Opdycke suggested Rakley should take the issue up with the City Council.

Commissioner Coleen Burrus said that though she was "very upset" about the private meeting, "we can’t do anything about it."