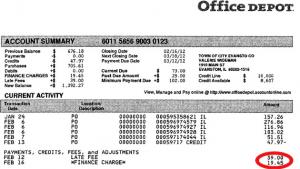 "Maybe Pulaski Day is a township holiday," Alderman Delores Holmes, 5th Ward, speculated, noting that Evanston schools take the day off, although the city does not.

Alderman Jane Grover, 7th Ward, wanted to know why the township spends $2,500 a month on accounting services. "Couldn't we consolidate that with the city and realize some savings?" she asked. 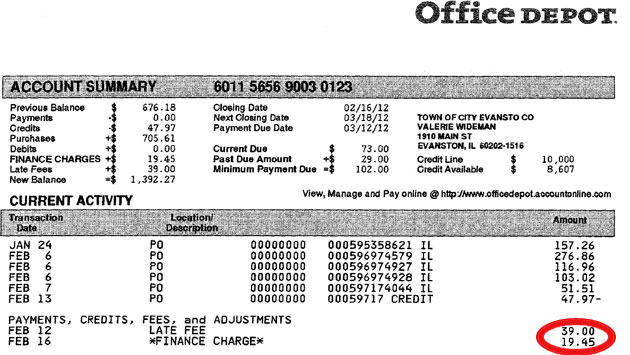 A copy of the township supervisor's bill from Office Depot with the late charges circled.

On smaller items, Grover wanted to know why Township Supervisor Pat Vance had run up $58.45 in late fees and interest charges on a $676 bill from Office Depot.

And why Township Assessor Bonnie Wilson had run up $17 in late fees and interest charges on a $142 bill at the same office supply store. 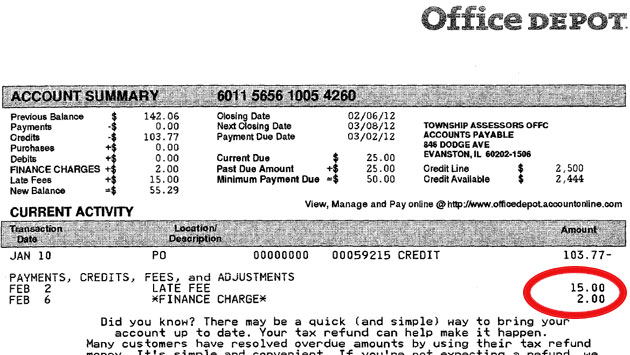 A copy of the township assessor's Office Depot bill with the late charges circled.

The failures to make timely payments on the bills added nearly 10 percent to what taxpayers will ultimately have to pay for the items purchased.

The town board members have asked the supervisor and assessor to make office supply purchases through the city's purchasing agreement with the office supply company, which could reduce costs.

City Manager Wally Bobkiewicz said city officials continue to talk with the township officials about setting that up, but it hasn't happened yet.

Alderman Judy Fiske, 1st Ward, suggested that a process be set up similar to the one used for questions about city bills — in which aldermen get the bills list in advance and can submit questions about the bills to staff, who prepare a written response to the questions before the meeting at which the bills are to be approved.

The supervisor and assessor have attended some Human Service Commmittee meetings, but have also skipped others, in the past — leading to continuing frustration among town board members about the resulting difficulty exercising oversight on town spending.

Despite the concerns, the committee voted unanimously to send the monthly bills list to the full City Council for approval.

Evanston residents are scheduled to vote March 20 on an advisory referendum asking whether they believe the township should be dissolved, with its duties take over by the City of Evanston.

Bobkiewicz has estimated that the change could cut several hundred thousand dollars from the township's roughly $1.5 million in annual expenditures.