Evanston's Plan Commission Wednesday night postponed action on plans for a Trader Joe's market at 1211 Chicago Ave. to provide more time to resolve concerns raised by people who live across the alley from the site.

Pat Mulhern, of 1224 Hinman Ave., said that, like several other neighbors who spoke, he conditionally supports the project.

"I would like to see the store get built," Mulhern said, adding that, with the developer's agreement Wednesday to fence off the alley from store traffic, "I think we have resolved the alley issue."

He said neighbors want store deliveries limited to from 7 a.m. to 8 p.m., while Trader Joe's wants to be able to accept deliveries from 6 a.m. to 10 p.m.

He also urged that the chain be required to turn off the store's signs when the store closes, so neighbors don't see glare from the signs all night.

And he suggested that a cinder-block wall might provide a better noise barrier than the eight-foot-tall wood fence proposed by the developer.

Tracy Quattrocki, a District 65 school board member who lives at 1220 Hinman, said she loves to leave her windows open at night in good weather, and the idea of three semi-trucks making deliveries at all hours seven days a week "really frightens me."

Former Plan Commission member Doug Doetsch, of 1216 Hinman Ave., said that until some issues are worked out regarding noise and traffic congestion, it's not clear that the Trader Joe's project meets the standards for Plan Commission approval.

And Dan Dorfman, of 1232 Hinman, said he believed the developer should provide landscaping along the alley side of the fence, for aesthetic as well as noise control reasons. 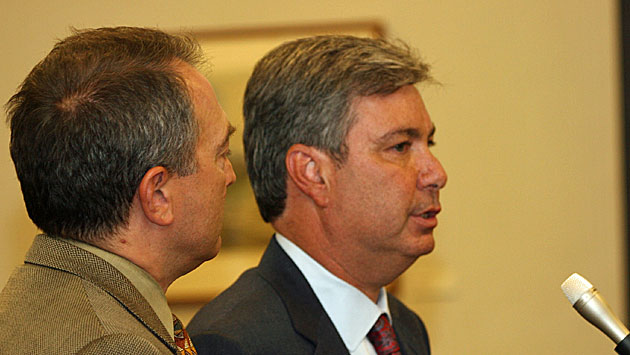 Top: Neighbor Tom Mulhern tells the Plan Commission about his concerns with the Trader Joe's project. Above: Developer Scott Gendell speaks to the commission, with architect Mike Breclaw at his side.

Developer Scott Gendell of Terraco Inc. said he wished some of the issues had been raised a month ago, "but I think a lot of good has come out of this hearing."

He said he'd work with city staff and the residents to address the concerns.

"Some things that are an issue now will be a non-issue once the store opens," Gendell predicted, arguing that new HVAC — or heating, ventilation and air conditioning — units that would be mounted on the store's roof are far quieter than ones produced just a few years ago.

He said he believes the store won't create a substantial amount of new traffic on Chicago Avenue. "A lot of our customers are already there," Gendell said, adding that neighborhood residents will be able to bike or walk to the new store, rather than getting in their cars to drive to existing Trader Joe's in other communities.

The Plan Commission voted to take up the Trader Joe's issue again at its next regular meeting, on Wednesday, Aug. 8.

The Plan Commission will make a recommendation to the City Council, which has the final say on the project.

The Trader Joe's would replace a former Blockbuster video store, two other storefronts and an old house now located on the property.