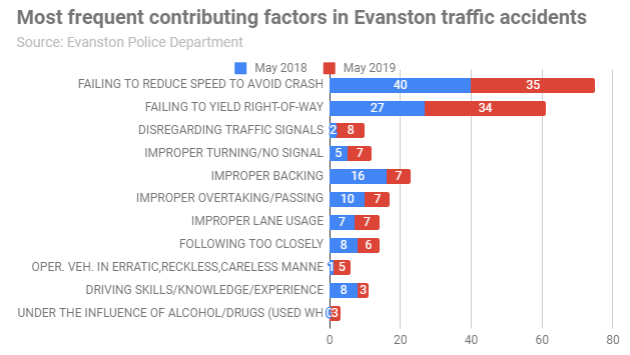 Traffic accidents increased just over four percent in Evanston last month to 169 crashes, compared to 162 in May a year ago.

Evanston police accident reports show that failing to reduce speed to avoid a crash was the top contributing factor in accidents in both months and failing to yield the right-of-way was the next most frequent cause.

Drivers did a lot better in avoiding “improper backing” this year — with only seven incidents of that, compared to 16 in the same month last year.

The chart above shows the number of accidents attributed to each of the 11 causes which were cited at least three times in one of the two months.

In about a fifth of the accidents no contributing factor was assigned by the investigating officer. Police Cmdr. Ryan Glew says that frequently happens when motorists drive to the police station to report an accident and officers haven’t been able to examine the accident scene.