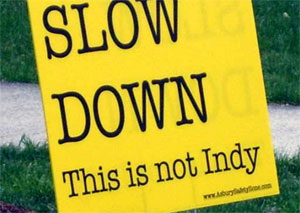 An Evanston Now reader spotted signs of protest over traffic on Asbury Avenue in north Evanston this afternoon.

Anna Renee Ross says she saw a host of the yellow protest signs planted in the parkway along Asbury from Isabella Street south almost to Central Street.

The signs, with slogans including “Do you drive this fast down your street?” and “Your mother says to slow down,” carry a web address of AsburySafetyZone.com, a non-functioning site. Another sign cautions drivers that “20 children under the age of 10” live on the block.

One carries the name Ed Walsh. We left a message this afternoon for an Ed Walsh who lives just off Asbury at 1317 Jenks St., but haven’t heard back from him yet.

We certainly hope Mr. Walsh and his neighbors won’t run afoul of Evanston’s restrictive sign ordinance, which prohibits placing signs in the parkway.

Ross says she was intrigued by the signs, but found they kept distracting her from paying attention to traffic as she drove down the street.