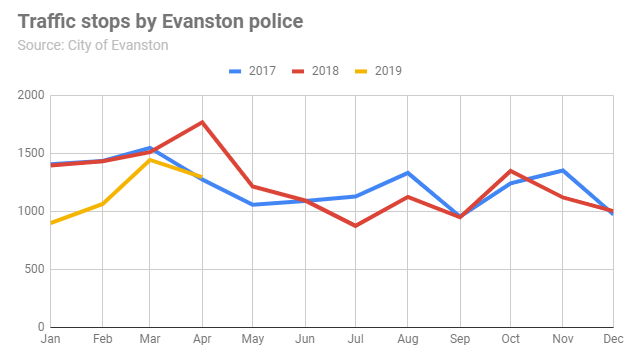 Traffic stops made by Evanston police are down 20 percent for the first four months of this year compared to the average of the same periods in 2017 and 2018.

The information, from the city’s data portal, shows that stops dramatically decreased this January and February, compared to the earlier years, and recovered somewhat in March and April.

Police Cmdr. Ryan Glew says severe winter weather may have depressed the number of stops somewhat this year, but he said it’s also possible that increased enforcement efforts are actually starting to reduce the number of drivers speeding or committing other traffic violations in town.

Traffic Sgt. Tracy Williams says over 1,600 of the citations this year have been issued to motorists ignoring the rules of the road on Ridge Avenue.

Ridge Avenue remains the Evanston street with the greatest number of traffic accidents. Data to adjust the accident numbers to account for traffic volume on the streets was not immediately available.