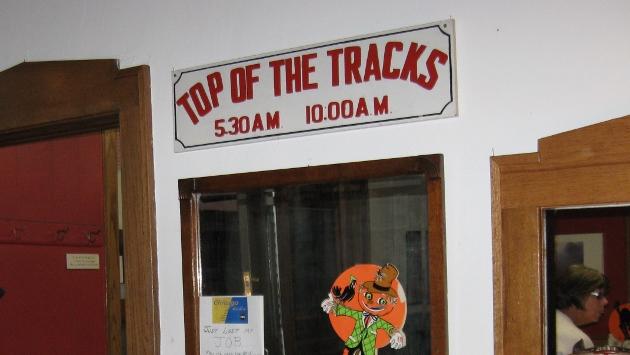 After 25 years of serving coffee and donuts to commuters at Evanston’s Central Street Metra station, the popular “Top of the Tracks” will pour its last cup Friday morning as owner Mary Lou Smith heads into retirement.

An Evanston native and graduate of Evanston Township High School, Smith’s café was filled with well-wishers Thursday morning, including one who brought a bouquet of flowers.

It quickly became apparent that Smith not only knows most of her customers by name, but she knows what they want. Hardly anybody had to place an order.

With a wink and a smile, she warned them that when the new owners come in on Monday, assuming that inspections by the city go well, the customers will have to tell them what they want.

But Smith has been dispensing more than breakfast items over the years. She has also become a central point for discussions of news pertaining to residents of north Evanston, who have counted on her to keep them posted on changes in the area. 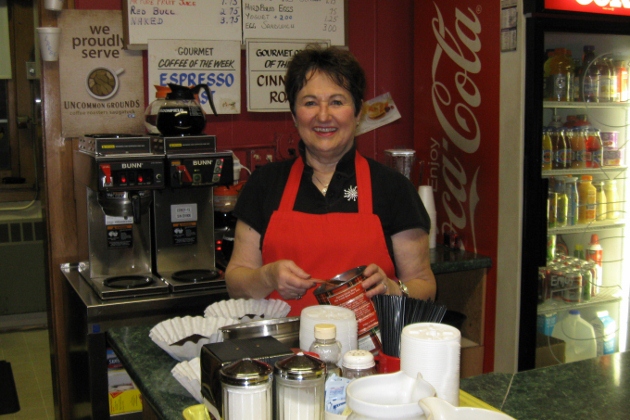 “I understand the city shot down McDonald’s,” said one customer, referring to a proposed fast-food restaurant on Gross Point Road and Old Orchard Road.

“I hear a restaurant’s going into the Ubaa,” said another, in reference to a popular Skokie bar on Crawford Avenue that went out of business a year or so ago.

Smith gives a great deal of credit to her husband, Bill (no relation to the publisher of Evanston Now), a retired Evanston police officer who wakes up at 2:30 every morning to pick up the bagels and donuts and make the coffee before the first train arrives around 5 a.m.

“The train’s engineers and conductors call ahead with their orders,” she said, “and Bill meets them on the platform with their food.”

Occasionally a friend or two will come and sit in one of the booths or tables and chat with Mary Lou as she works, but most of the time the customers grab their food and disappear into the station waiting room or the platform outside. The café closes after the last train leaves around 10 a.m.

The routine changes during a hotly fought local election, she says, as news crews and leaflet-distributing candidates alter the atmosphere. Occasionally a candidate will order free coffee for all the commuters, and then activity really picks up, she says.

Particularly memorable was the day after the Sept. 11, 2001, tragedy at the World Trade Center buildings in New York. Television news crews showed up to interview commuters about the attack, she said.

Because she has so many regulars, Mary Lou has come to know many of them personally, including the health of their spouses and some unrepeatable details of their love lives. Once she held a party in the depot for the many adult singles that had lost their spouses through death or divorce.

She’s now looking to expand a part-time business of staging houses for sale, but in the meantime, she says she may come back to the station and hand out invitations to a BYOB party for her customers at the newly opened Curt’s Café on Central Street.

But first, she has some sleep to catch up on.