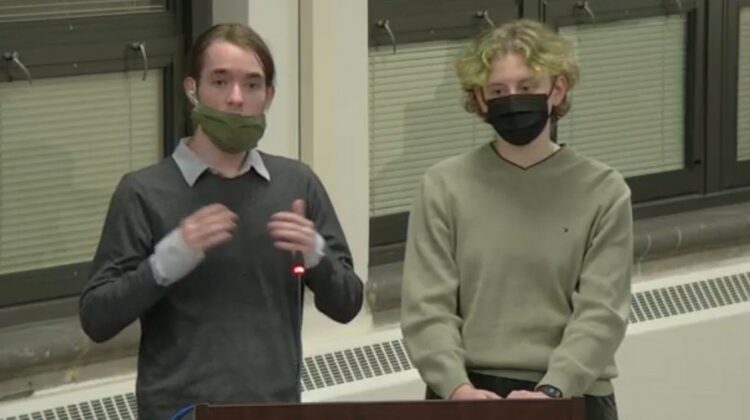 Nova Horrell and Maisy Kobernik-Pollack address the ETHS board.

Earlier this month, the two students presented the school board with an open letter regarding the transgender community at ETHS, a letter that included suggestions on a new way of doing things.

The open letter was based on nearly 150 student responses to a survey the two seniors distributed via social media, in person, and with the help of teachers.

Maisy tells Evanston Now that ETHS is “well intentioned” with policies and attitudes towards transgender students.

But Maisy also says that often “among progressive educational institutions, there’s value brought to having a conversation, but the school doesn’t actually make changes based on that conversation.”

The open letter said ETHS administrators “have been making a good-faith approach to try and make transgender students feel safe in their learning environment.”

However, the letter also stated that many transgender students often feel uncomfortable.

“Change needs to be done,” the letter said, “so that no student feels this way.”

Among the suggestions for change: ETHS should be more proactive in letting students know about gender-neutral spaces such as bathrooms in the building, and also to better publicize ETHS website resources for transgender and transitioning students.

That may seem simple, and Nova says “what we want is really, really easy.”

But even something simple, Nova adds, “can literally make the educational experience so much easier for students who are trans.”

There’s more, and here, too, the students say this solution is not difficult.

Namely, this other issue is about names, and the pronouns related to them.

The letter said teachers usually do one of two things when the school year starts, either not asking for a student’s he/she pronouns and just assuming, or having everyone in the class publicly state their pronoun of choice.

Both options, the letter says, are problematic. Just guessing pronouns “allows for the greatest chance of mis-gendering students.”

On the other hand, a public pronoun statement is a real problem for students who are not sure of their gender identity, or simply don’t want it known right then.

A public declaration puts “closeted” trans students “on the spot,” the letter says, with a dilemma of either “lying and enforcing the perception of yourself as the gender you were assigned at birth, or outing yourself, which possibly opens you up to a barrage of unsafety.”

The open letter suggested that on day one, teachers provide all students a private way to respond with their preferred name and pronoun.

The letter also said teachers should create a “gallery” on the classroom wall or online so students can, if they choose, share their pronouns. Not mandatory, just optional.

“Learning someone’s pronoun,” the letter stated, “is as important as learning their name.”

While that may be simple, it can also be hurtful if not done properly.

“I routinely get mis-gendered in class,” Nova tells Evanston Now. Something like that can cause “a lot of psychological problems.”

They suggest that students be reminded of available services and also of safe options for making pronouns known all year, not just when school starts.