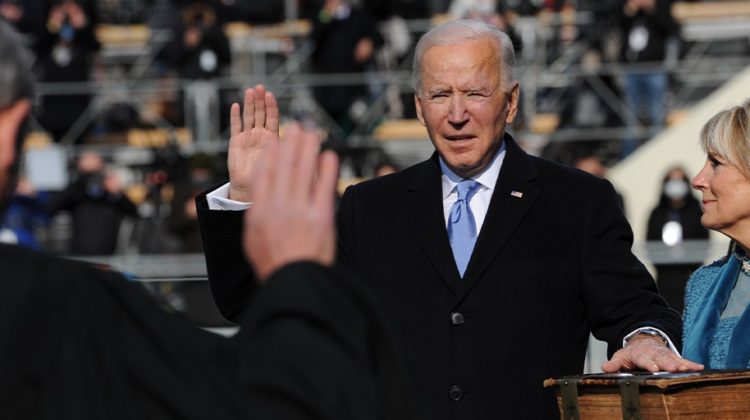 President Biden taking the oath of office on Wednesday. (Wikipedia)

When he was a United States senator, Joe Biden commuted every day for years on the train between his home in Wilmington, Delaware, and his work in Washington, DC, earning the nickname “Amtrak Joe.”

Now that “Amtrak Joe” is President Joe, and has a Democratic-controlled Congress, Chicago-area transit agencies see a much improved chance of getting federal dollars to help survive the coronavirus pandemic.

At a virtual meeting of the Regional Transportation Authority board Thursday morning, Government Affairs Director Jeremy LaMarche said the “prospect of additional infrastructure dollars is more likely” due to the power shift in Washington.

Transit ridership has been decimated by the coronavirus pandemic, as commuters work from home instead of heading downtown. Hardest hit in Chicagoland is the 11-line Metra rail network. Evanston is on the Union Pacific North route, with three stations in town, Main Street, Davis Street, and Central Street.

UP-N is actually doing better than most Metra routes, although “better” is a relative term. UP North ridership last November was 11.4% of the same month a year earlier. Systemwide, Metra was at 8.3% of year-earlier traffic. Among the hardest hit routes was BNSF to the western suburbs, carrying a paltry 5.9% of usual ridership.

It’s unclear why UP-North is not getting hurt as hard as some other lines or the entire system. It’s possible UP-N carries more essential workers who can’t work from home, or perhaps Evanston is a destination as well as an origin for train riders, as opposed to many other suburbs. At this point it’s all conjecture.

Bus and CTA train traffic are also significantly lower than before COVID-19, but it’s not quite as bad as Metra, because more essential workers use the bus or ‘L’ in the City of Chicago, as do lower income individuals who may not have a car.

RTA is currently working on short and long-term plans — first to make it through the COVID crisis, and then to figure out how transit ridership will be different in the long run.

RTA will receive $486 million from the federal COVID relief package approved last month, to divide among Metra, CTA, and the Pace suburban bus system. But it’s still not enough to cover a projected $500 million shortfall in 2021. More red ink is expected in 2022 as well.

Transit leaders here hope “Amtrak Joe” hops on the budget train and rides to the rescue with additional dollars.