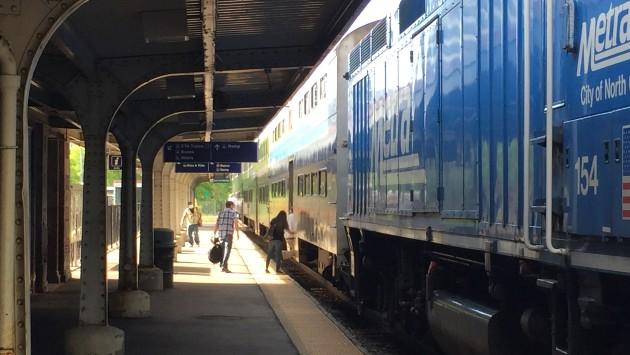 The rush is gone from “rush hour,” and there is no telling how, or when, it may come back.  At 8:15 this morning, five passengers boarded an inbound Metra train at the Davis Street station. Pre-pandemic, dozens would have lined up, hoping to find a seat on an already crowded train.

Now, Metra, the regional rail system, is carrying 97% fewer passengers than it did before the COVID-19 crisis hit Illinois in mid-March.  Social distancing on near-empty trains is no problem, even though the trains have fewer cars. The masked passengers look more like 19th century train robbers than the 21st century commuters who normally ride.

But with Illinois in line for partial opening of some businesses on Friday under Phase 3 of Governor JB Pritzger’s “Restore Illinois” plan (Chicago expects to allow such openings in early June), there is still no sense of what mass transit will look like in the near and in the more distant future, other than this:  “Commuter rail will not be the same after COVID-19.”

That was the PowerPoint message at a recent Metra board meeting.  Fewer tickets sold plus lower sales tax revenues add up to $535 million in projected red ink for the remainder of 2020 and all of 2021. An anticipated $400 million plus in federal dollars will help, but that still leaves a huge gap.  Metra officials concede the projected losses could get better, or could get worse. Right now, it’s all an estimate.

The uncertain future impacts Evanston.  With three stations (Main, Davis, and Central), Evanston puts more commuters on the Union Pacific – North line than any other community between Chicago and the end of the line at Kenosha, Wisconsin.  The most recent boarding numbers (2018) for Evanston’s three stops combined show more than 2,800 inbound passengers in the morning rush period before 9 a.m.

Other Evanston commuters take the CTA purple line.  Systemwide, CTA ridership is down 80 per cent.  And PACE buses are carrying only about a third of what they used to.

All transit systems face the same long-term problem, namely, what will happen to the downtown core, be it Chicago or Evanston? With so many people now working from home, will that continue when the pandemic ends, meaning fewer commuters? And if so, will fewer trains or buses be needed?

That issue is somewhat down the road, or down the railroad. But currently, as Illinois businesses start to gradually reopen, transit operators will have to adjust service to a different demand.  As much as Metra, CTA, and PACE clean rail cars and buses, and they do, passengers will likely remain nervous.  Metra board member Rodney Craig said in a transit agency meeting, “Until we have a vaccine available, I don’t know who’ll get on a closed environment.”

Metra spokesperson Michael Gillis says service will be slowly increased as demand returns.  When passengers do come back, he says, cars will be added to trains to make room for social distancing.  Or perhaps, a “shadow train” could run closely behind another, with additional cars should the first train fill up under social distancing specifications.

“We’re paying attention and we’ll have to adjust accordingly,” Gillis says.  “We’re aware there will be a new normal.”