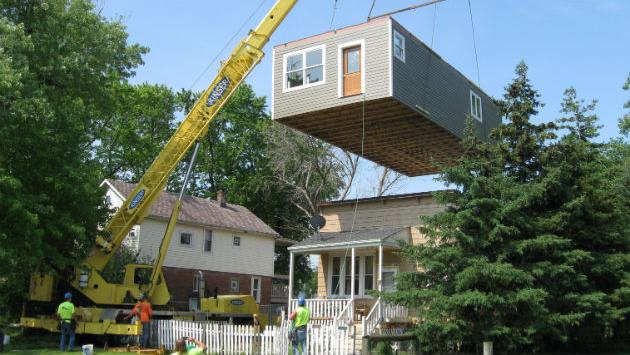 Update 10:30 a.m. — The truck pulling the first floor of the ETHS "Geometry in Construction" house headed out of the parking lot at 9:22 a.m. and quickly made its way to 2142 Dewey Ave., where movers were confronted with a parkway tree right in front of the empty lot where it was destined to go.

But the house movers already knew that, of course. They quickly fastened ropes around the building, attached to a giant crane, and hoisted it up and over the one-story house at 2144 Dewey Ave.

Within an hour after leaving the construction site at the high school, the first floor of the house was already in its assigned space in the neighborhood.

Then the truck turned around and headed back to ETHS to get the second floor. 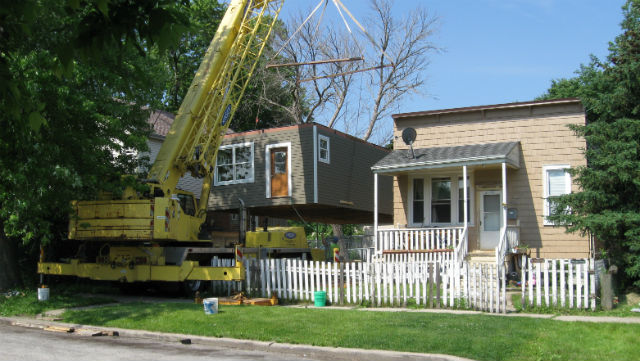 The first floor is gently lowered into place.

Noon update: By noon, the second floor had been delivered and the operation was complete. 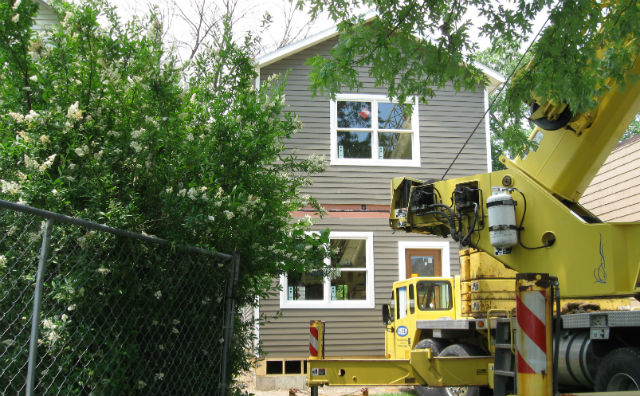 Both sections are delivered and installed at 2142 Dewey Ave.

Workmen began arriving at the south parking lot of Evanston Township High School before 7 a.m. today to prepare the student-built house for its move to its permanent home in the 2100 block of Dewey Avenue, starting at about 9 a.m.

For the third year, a house has been constructed by students in the school’s Geometry in Construction course that will be moved onto a vacant lot donated by the city for sale to a low-income family as part of Evanston’s affordable housing stock.

Because it’s a two-story house, the building will be moved in two sections, workers said, as the convoy moves slowly down Lake Street to Dodge Avenue, north on Dodge, east on Simpson Street, north on Ashland Avenue, and west on Payne Street to its ultimate location at 2142 Dewey Ave. 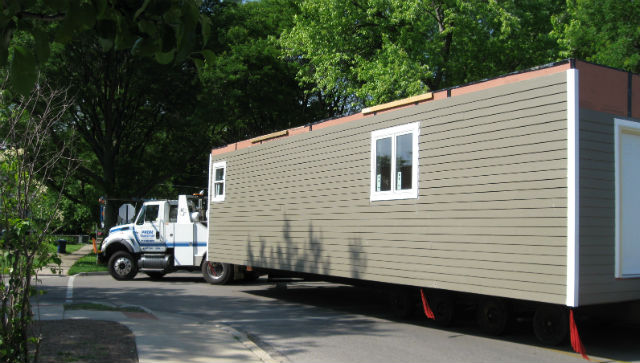 First floor pulls onto Lake Street at 9:22 a.m. to begin its journey to Dewey Avenue

Early-morning weather in Evanston was ideal for the move, which officials hope to accomplish quickly, barring unforeseen developments.

The plans call for the building to be resting on its foundation no later than 1 p.m. today. Then it will take several weeks for the final work to be completed before the house is put up for sale, under the auspices of the Community Partners for Affordable Housing.