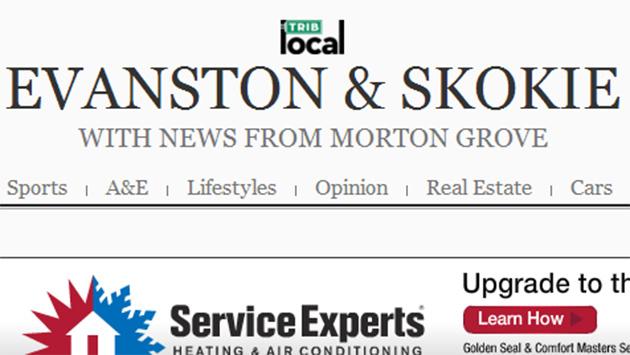 The Chicago Tribune has scaled back its coverage of Evanston.

The most dramatic evidence of the reduction appeared within the past few days when the paper folded its separate online page for Evanston news into a new page that combines coverage of Evanston, Skokie and Morton Grove.

The paper, which as recently as a year ago had a full-time reporter assigned to Evanston and Skokie, as well as a full-time community producer assigned to a cluster of North Shore towns including Evanston, now is covering the city with a freelance reporter who is also assigned to stories in several other communities.

The Trib’s owner, Tribune Co. recently emerged from four years of operating under bankruptcy court protection and industry observers believe it is likely to seek to sell some or all of its newspaper properties to focus on its profitable lineup of television stations.

So far TribLocal has continued to maintain separate front pages for many other, smaller communities, including Glenview and Northbrook, and last week it told readers in Highland Park and Deerfield that it was expanding coverage of those communities.

The cutback here by the Trib follows a reduction in Evanston coverage last fall by the Chicago Sun-Times-owned Pioneer Press chain and its Evanston Review.

Until last fall the Review had two full-time reporters assigned to cover Evanston — Bob Seidenberg, who focused on city government and Karen Berkowitz, who primarily covered the schools. But Berkowitz now has been assigned to a different community, and the Review is filling out its editions with reports from freelance contributors. The chain more recently announced plans to close its nearest office, in Glenview.

The newest entrant in the Evanston news market, the AOL-owned Patch chain, has also been scaling back. Patch has gradually eliminated its budget for freelance reporters. While it still has a full-time editor assigned to Evanston it’s filling out its page with more stories from other communities.

In the face of the cutbacks by others, Evanston Now is planning to expand its reporting resources this year.