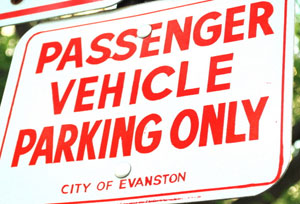 Evanston’s on-street truck parking ban makes no distinction between nice and ugly commercial vehicles. And that has Charles Cannon steamed.

Cannon, of 640 Dodge Ave,. says he’s received hundreds of dollars in tickets for parking his blue 2008 Chevy Express van in front of his own home.

So, he says, he gathered petitions signed by just about everyone on the block asking that the “passenger vehicle parking only” signs be removed and took them to the city’s Parking Committee meeting Wednesday night.

Cannon says his van has no commercial signage, is smaller than many SUVs and only gets ticketed because the state assigns it commercial license plates.

Cannon’s home doesn’t have a driveway or garage, so off-street parking isn’t a solution. And he says he doesn’t want to park it around the corner on a side street because of concerns it might be broken into when he can’t keep an eye on it.

But Cannon’s alderman, Colleen Burrus, who sits on the Parking Committee, said she’s worried about removing the signs.

North of Main Street on Dodge, Burrus says, there are no signs limiting parking to passenger vehicles and “junk vehicles are parked there, commercial vehicles that don’t look so nice, open truck beds, not necessarily appropriate for residential areas.”

“We need to look at the global issue and think differently about what’s a passenger vehicle versus what’s a truck,” Burrus said. 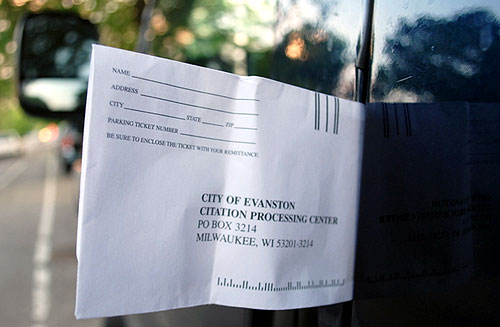 Cannon says he’s been greeted too often by one of these when he goes out to his van.

The city code has two different provisions limiting parking to passenger vehicles on any block in which more than half the buildings are used exclusively for residential purposes — but only if signs are posted.

One imposes a $5 to $25 fine for parking on such a block at any time of day. The other imposes a fine of $10 to $25 for parking there overnight.

Parking Committee member Jared Davis said that as a business owner he has experienced Cannon’s problem himself. He suggested that the city create a permit for homeowners who have such vehicles.

Crime is is a major factor, Davis said. People want to have their vehicles right at their home.

He cited the risk faced by cab drivers working a late shift who might have to return home from parking their cab blocks away at two in the morning with a pocket full of money.

Parking Committee member Jonathan Perman, executive director of the Chamber of Commerce, said, “The idea of the ordinance is really to regulate aesthetics, but the mechanism is a state-regulated license classification that has nothing to do with aesthetics.”

He suggested that city staff develop a better classification system that’s not based on license plates.

“It’s also a matter of neighborhood character,” Galloway said. “If you see large vehicles parked there it gives the impression its an Appalachian community where anything is allowed.”

“So we want to limit the bulk of commercial vehicles being parked, or maybe impose limitations on signage,” he added.

Ricky Voss, who heads the city’s parking staff, said he would “try to come up with some kind of program” to address the concerns that the committee could consider at a future meeting.