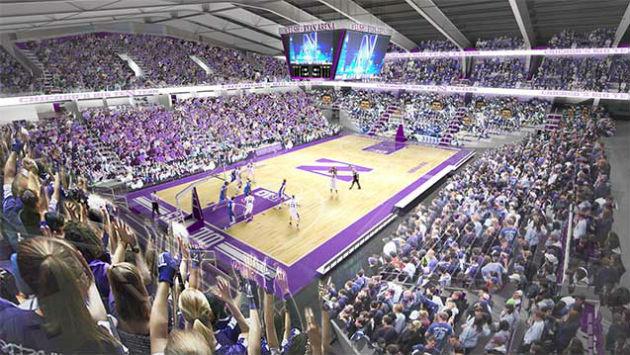 Trustee Tim Sullivan and his wife, Sue, and trustee and alumnus Jeff Ubben ’87 MBA and his wife, Laurie, have committed a total of $3 million to Northwestern Athletics and Recreation to establish the Sullivan-Ubben Head Men’s Basketball Coaching position.

The couples’ gifts will provide support for the head coaching salary for men’s basketball, as well as ongoing operational funding for the program.

Chris Collins serves as the inaugural Sullivan-Ubben Head Men’s Basketball Coach. He is one of only three coaches to hold an endowed position at Northwestern. The other endowed coaching positions at the University are the Dan and Susan Jones Family Head Football Coach, held by Pat Fitzgerald ’97, and the Combe Family Head Lacrosse Coach, held by Kelly Amonte Hiller.

“We are so incredibly grateful to the Sullivans and the Ubbens for their generosity and passion for the men’s basketball program,” said Jim Phillips, vice president for athletics and recreation. “The confidence that this reflects in Coach Collins, his staff and our student-athletes is pivotal to our success moving forward. With the upcoming renovation of Welsh-Ryan Arena, and now this endowed head coaching position, Northwestern basketball is better prepared than ever to support our student-athletes’ pursuit of excellence in the classroom, in the community and in competition.”

Collins was named the 24th head coach of Wildcats men’s basketball in March 2013, bringing with him a track record of excellence. The Northbrook, Illinois, native has guided the ’Cats to a 12-3 record this season after leading Northwestern to a regular season-record 20 wins in 2015-16. Collins spent 13 seasons on the staff at Duke University, his alma mater, and has extensive experience with USA Basketball, including with the program’s gold-medal performances at the 2008 Beijing Olympics, the 2010 FIBA World Championships and the 2012 London Olympics.

“The faith in our staff and student-athletes displayed by the Sullivan and Ubben families is extraordinary,” Collins said. “We are building the foundation of something special here in Evanston, and the impact of their generosity will ripple through many different parts of our program moving forward. Our goal is to compete for and win Big Ten and NCAA championships, and every bit of support is critical to realizing those ambitions.”

“We are excited to be on the ground floor of the basketball program Jim Phillips and Chris Collins are building at Northwestern University,” said Tim Sullivan, managing partner at Madison Dearborn Partners (MDP), LLC, a leading private equity investment firm based in Chicago. Since MDP’s formation in 1992, the firm has raised seven funds with aggregate capital of over $17 billion and has completed investments in 132 companies across a broad spectrum of industries.

“Given his pedigree and background, we have no doubt Chris will be uniquely successful in creating one of the premier basketball programs in the country at one of the world’s leading research universities,” Sullivan said.

“I grew up watching NU basketball. With Chris’s arrival and the NU sports resurgence under the leadership of Jim Phillips, we wanted in on the ground floor,” said Jeff Ubben, CEO, chief investment officer and founder of ValueAct Capital, a San Francisco-based private money management firm.