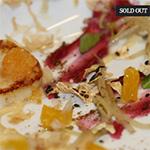 Pop up restaurant concept Under the Table has reportedly been shut down by the City of Evanston for failing to get a restaurant license.

Eater Chicago reports the license issue has thrown into doubt plans for weekend brunches and dinners that the venue has sold out for the next three weeks.

Under the Table got its start at Company, a pop-up space on Chicago Avenue, but has recently moved to a new location at 930 Pitner Ave.

Owner Max Mora told Eater he doesn't want to move the upcoming events back to the old location.

It's not clear how long it may take to get Under the Table above board with the city.