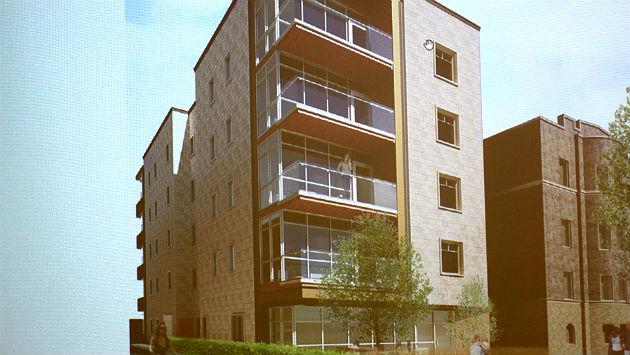 The site, a 40-foot wide lot with an older two-family house, is surrounded by vintage apartment buildings.

Developer Paul Harb also owns a set of 15 garages across an alley from the property that he plans to use to provide parking for the new building.

The garages off the alley, which abut the CTA Purple Line tracks.

Harb told the DAPR committee that the garages are now rented as storage spaces by people who don’t live in the neighborhood, so converting them for use by tenants in the new apartment building wouldn’t aggravate on-street parking problems in the area.

The R5 zoning of the property permits a five-story building height. But it would typically require a 50-foot lot width and would require a lot size of 14,000 square feet for a 15-unit building, rather than the actual 6,987 square-foot lot.

But under the city’s inclusionary housing ordinance a developer is entitled to a 20-percent increase in dwelling units for providing affordable housing on site in a transit-oriented development area.

Harb’s attorney, John Zemenak, argued that building a smaller number of units wouldn’t make economic sense given the cost of the land and the cost of construction.

Cook County Recorder of Deeds records indicate Harb paid $615,000 for the house in January 2018 and took out a $196,000 mortgage on the the garages after acquiring them last October.

Many developers have chosen to pay the fee in lieu, rather than provide affordable housing on site, Zemenak said, but Harb wants to provide it on site. On-site units effectively cost developers more because the construction cost typically is greater than the in-lieu fee payment.

Barbara Blades, who lives at 2111 Maple Ave., a block south of the site, said the proposed building would “kind of dwarf everything around it.”

“That end of the block is really congested,” Blades said, “and parking is nonexistent.”

But she conceded that the new development “would be an improvement” over the existing house.

The plans call for the building to have one studio, five one-bedroom, two two-bedroom and seven three-bedroom apartments.

The studio and one of the one-bedroom apartments would be designated as the affordable units. Harb said city officials have told him those are the unit sizes that are most needed for affordable housing.

The committee recommended approval of the proposal on a 7-2 vote subject to conditions that a restrictive covenant be used to assure that the off-site garages would be available for the building’s tenants, that the tenants would not be eligible for on-street parking permits in the neighborhood and that the developer provide at least 15 indoor bike parking spaces.

The project is scheduled to be discussed at the 5th Ward meeting at 7 p.m. on Wednesday, June 12, in Room G300 at the Civic Center.

It the request for variances will be heard by the city’s Zoning Board of Appeals at 7 p.m on Tuesday June 18.