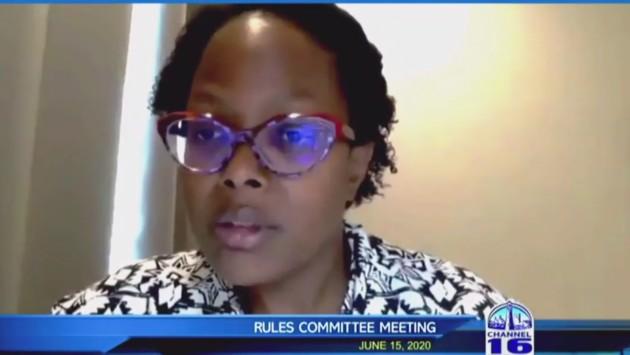 Two aldermen objected Monday night to giving leaders of non-profit organizations a prominent role in the search for a new Evanston city manager.

Alderman Cicely Fleming, 9th Ward, said she wanted to give residents have as much input as possible at stakeholder meetings, and they should be at the table for stakeholder meetings to define the qualities the city should seek in a new manager, rather than the leaders of non-profit groups who don’t live in Evanston.

Fleming suggested at the virtual meeting of the Rules Committee that each alderman should name one or two residents to participate in the meetings.

But Alderman Judy Fiske, 1st Ward, said that wouldn’t work in her ward. “I have 100 people at my ward meetings,” Fiske said. “I want to make sure that it doesn’t look like I’m selecting the two people from my ward and leaving everybody else out.”

Heidi Voorhees, head of the GovHR USA consulting firm hired to help with the search, said the consultants could hold as many meetings with constituent groups as the aldermen wanted. “It can be any groupings you decide,” Voorhees added.

Alderman Tom Suffredin, 6th Ward, said that if the consultants are to meet with any officials from Northwestern University, the session should be public and on the record.

“NU doesn’t ask us for input when they make decisions,” Suffredin said, “if we’re going to ask for their input, it should be in public.”

But Mayor Steve Hagerty disagreed, saying university officials do seek his input on things and that the city has consultants meet with people on all sorts of projects without necessarily opening those sessions up to the public.

Alderman Ann Rainey, 8th Ward, said the university has asked city officials for their opinions — including on the selection of a new university president.

Because of COVID-19 pandemic restrictions on face-to-face gatherings, the stakeholder meetings are all expected to be conducted using the Zoom video conferencing platform.

Rainey said she favored the use of that platform, rather than Google Meet, because it provides a captioning option that would be beneficial to people in her ward who have hearing issues.

In addition to the meetings organized by the consultants, Fiske and Alderman Eleanor Revelle, 7th Ward, said they planned to follow the lead of Alderman Peter Braithwaite, 2nd Ward, and hold a ward meeting to gather thoughts on what characteristics would be important in a new manager.

The consultants plan to also collect input through an online survey and by email, before preparing a position announcement and recruitment brochure for the City Council’s review and approval early next month.

Hagerty said that because Interim City Manager Erika Storlie is a candidate for the city manager’s job, she would not be involved in coordinating the consultants’ work on the search. Instead that role will be handled by the city’s human resources director, Jennifer Lin, and the acting assistant city manager, Kimberly Richardson.