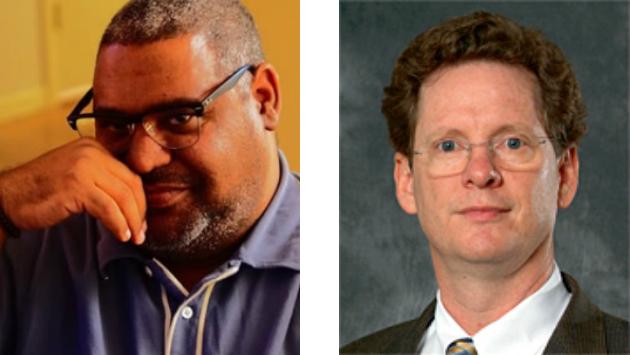 Northwestern University professors Christopher Abani and Timothy Feddersen have been elected to the 2015 class of the American Academy of Arts and Sciences. One of the country’s most prestigious honorary societies, the academy supports independent research, ranging from technology policy and global security to issues involving the humanities and education.

In all, 197 academics and professionals from around the country were selected to join the academy this year.

Abani is a poet, essayist, screenwriter and playwright; Feddersen specializes in managerial economics and decision-making.

The new members will be inducted during an Oct. 10 ceremony in Cambridge, Mass.

Born in Nigeria to an Igbo father and English mother, Abani’s work reflects his bi-cultural, bi-lingual and bi-racial upbringing and education. His popular TED Talks, public speaking and essays have made him an international voice on humanitarianism, art, ethics and shared political responsibility.
Abani recently received a $50,000 United States Artists Ford Fellowship, which honors America’s most innovative artists. Last month, the city of Jackson, Tennessee, proclaimed April 24 as “Chris Abani Day” for his overall body of written work and for “elevating art, culture and humanity with his public speaking.”

Abani is the author of six novels, including his most recent work, “The Secret History of Las Vegas”(Penguin, 2014). At Northwestern, he teaches creative writing and is Board of Trustees professor of English at the Weinberg College of Arts and Sciences.

Best known for his work looking at why elections are held — known as “information aggregation and elections” — Feddersen is the Wendell Hobbs Professor of Managerial Politics and a professor in the Managerial Economics and Decision Sciences department at Northwestern University’s Kellogg School of Management.

Back in graduate school, Feddersen began puzzling over why people vote when their individual ballots don’t appear to matter. “I study the intuitive idea of using majority rule to make decisions and why two heads are better than one,” Feddersen said. “It’s why we form committees and juries.

“Everyone has a little bit of information about what makes a good decision, but no one knows everything,” Feddersen added. “Voting is a way to collect individual independent observations and turn it into a decision.”

Feddersen hopes academy membership will raise the profile of his research field, opening it to those in other disciplines and creating new synergies and relationships outside of political science and economics.