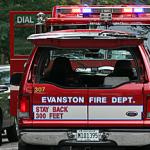 Evanston firefighters had to battle two blazes just minutes apart this afternoon in different parts of the city.

The first blaze, in a single-family home in he 1100 block of McDaniel Avenue was reported at 3:50 p.m.

Fire Division Chief Dwight Hohl says the first companies on the scene found heavy smoke throughout the house, with fire in a northeast bedroom threatening to enter the roof space.

But firefighters managed to limit the spread of the blaze to the bedroom and part of the roof. No one was inside the home when the fire broke out.

Then about 4:08 p.m. a fire was reported in an apartment building at 2225 Ridge Ave. The fire there was in an oven and was quickly extinguished.

In addition a bystander at the McDaniel fire fainted. Paramedics transported that person to the hospital where the victim was reported in stable condition.