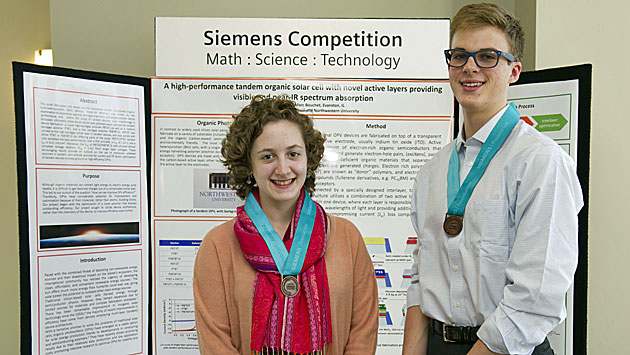 Two Evanston Township High School students were among only three from Illinois who competed in the regional finals at Notre Dame University for the Siemens Competition in Math, Science and Technology earlier this month.

Marc Bouchet and Sarah Posner did research on organic solar cells that could advance understanding of renewable energy.

Organizers say the event was not your average science fair, and that competitors were doing Ph.D level research while still in high school.

Over 2,200 teens nationwide entered the competition and only a select few were named regional finalists.

He's considering majoring in naval architecture, among other fields and says he'd love to build boats like those that compete in the America's Cup races.

Posner says “Solar energy is one of the most viable alternatives to environmentally harmful and nonrenewable energy sources." She's is a National Merit Semifinalist and member of National Honors Society, themusic honors society and has been a competitive swimmer since age eight.

She's considering becoming an industrial designer so she “can do both science and art at the same time.”