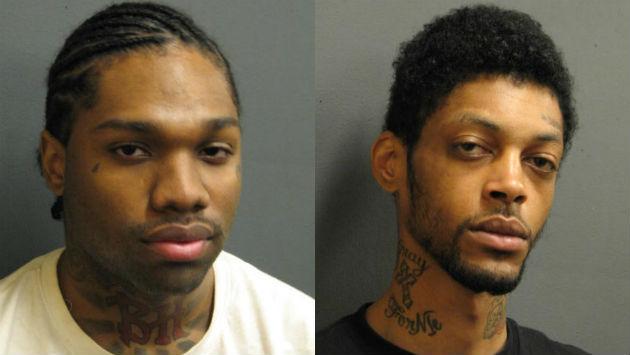 Police Cmdr. Joseph Dugan says the first traffic stop occurred about 6:47 p.m. Friday, when officers observed a vehicle traveling westbound in the 2400 block of Oakton Street with one of the occupants not wearing a seat belt.

The vehicle was curbed in the 3000 block of Oakton Street in Skokie and upon approaching the vehicle, Dugan says, the officers detected an odor of cannabis coming from inside.

Dugan says the driver, a 24 year old Morton Grove man, said  he had a small amount of cannabis in his pocket, which was recovered by an officer.

The officers said the rear seat passenger, Virgil M. Houston, 23, of 9463 Niles Center Road in Skokie told them he had a duffel bag in the rear seat that contained cannabis and that a check of the duffel bag revealed a glass jar containing cannabis along with packaging material and a digital scale.

Dugan says when they continued to search the vehicle, officers found a loaded Jennings-Bryco .380 caliber handgun under the rear portion of the front passenger seat.

All three occupants were transported to the Evanston Police Department.  Houston was charged with felony unlawful use of a weapon by an armed habitual criminal, misdemeanor charges of not having a firearm owner’s ID card and unlawful possession of drug paraphernalia, and a traffic ciatation for failure to wear a safety belt.

The driver and front seat passenger were given citations for city ordinance violations for the cannabis and open alcohol violations.

Later Friday, about 11:09 p.m., tactical officers conducted a traffic stop on a vehicle at Lyons Street and Darrow Avenue after noticing the car had a headlamp burned out.

As the vehicle was pulling to the curb, Dugan says, the rear seat passenger, who the officers recognized as Kevin MJ Logan, 28, of 844 E. Capri in Palatine, quickly exited the vehicle and began to walk away while adjusting his waistband.

The officer’s attempted to stop Logan, but he began running.

Dugan says the officer’s pursued Logan on foot to the rear of a residence in the 1700 block of Lyons Street when they observed him toss a loaded Ruger .380 caliber handgun. Logan was taken into custody and the handgun was recovered.  Logan was charged with two felonies, unlawful use of a weapon by a felon and possession of a firearm with a defaced serial number and a misdemeanor for lacking a firearm owner’s ID card.