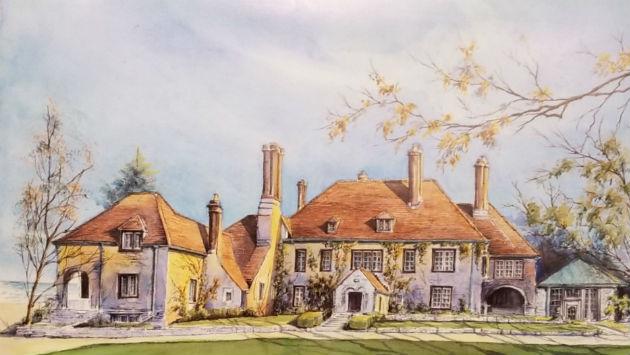 Advocates for two proposals to reuse the lakefront Harley Clarke mansion in Evanston described their plans at a community meeting Tuesday evening at the Civic Center.

Audrey Niffenegger, author of The Time Traveler’s Wife and other novels, described plans for an Artists Book House, which she described as an outgrowth of a since closed program she was involved with at Columbia College Chicago, the Center for Book and Paper Arts, that focused on the art of papermaking and the physical creation of books.

“It was so much fun,” Niffenegger said, “It’s such a shame Columbia’s not doing it any more.”

She said she envisioned having a letterpress printing press in the basement of the mansion and providing writing space for authors in some of the upstairs rooms while others could be used for book binding and creative writing classrooms.

Plants grown in the garden, she suggested, could be harvested and turned into paper. And she anticipates the facility would also include a library, bookshop, gallery and a cafe.

Residents who turned out to hear the presentations in the Parasol Room at the Civic Center.

Niffenegger, who has acquired significant wealth from her successful novels, said she was prepared to provide some of the funding for the project herself, but that it would require additional donors.

“We’re still working on nailing down hard numbers on what it will cost,” she said.

Patrick Donnelly and several other members of the Evanston Community Lakehouse & Gardens group presented an updated version of their proposal. An earlier version was rejected by the city in a previous round of efforts to find a new use for the mansion.

Donnelly said the group envisions holding seasonal gatherings at the mansion — avoiding the summer months when the available parking is used by visitors to the adjacent Lighthouse Beach.

Also speaking for the Lakehouse group, Bill Brown a construction management consultant who’s done work at First United Methodist Church and the Chicago Botanic Garden, said the 18,500 square foot mansion “is not in bad shape” and restoration of the property “is well worth doing.”

He suggested renovations will need to be done in phases and ultimately may cost between $5 million and $10 million.

The city has set a deadline of Feb. 28 for groups interested in leasing the mansion to submit their proposals for its reuse.