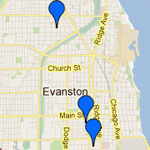 Cmdr. Jay Parrott says police responding to a suspicious persons call in the 2200 block of Lincoln Street about 11:30 a.m. Tursday spotted two people in the area who tried to flee from uniformed officers.

Parrott says the two, both 15-year-olds from Evanston, were taken into custody after a brief foot chase and were identified on the scene as the persons seen lurking in a yard on the block.

Parrott says Juvenile Bureau investigators determined that the youths had been scouting the area to commit a residential burglary, and that they were also responsible for two incidents Monday — a burglary in the 1400 block of Washington Street and an attempted burglary in the 1200 block of Austin Street.

Both youths were referred to court and, Parrott says, as a result of the arrests a third juvenile is being investigated, but no charges have been filed yet against that youth.