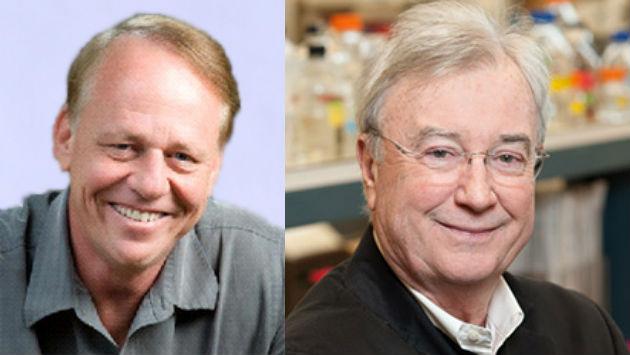 Northwestern University scientists Thomas J. Meade and Joseph R. Moskal have been named 2017 Fellows of the National Academy of Inventors.

The NAI says the fellow designation honors a prolific spirit of innovation in creating or facilitating outstanding inventions that have made a tangible impact on quality of life, economic development and the welfare of society.

Meade and Moskal will be inducted April 6 at the John F. Kennedy Presidential Library and Museum in Boston as part of the 2017 annual conference of the National Academy of Inventors. U.S. Commissioner for Patents Andrew Hirshfeld will provide the keynote address for the ceremony.

A total of 175 researchers were named in the new class of fellows, bringing the total number to 757, representing more than 220 research universities and governmental and nonprofit research institutions.

Meade is the Eileen M. Foell Professor of Cancer Research in the Weinberg College of Arts and Sciences, Northwestern University Feinberg School of Medicine and the McCormick School of Engineering. He has appointments in five Northwestern departments: chemistry, molecular biosciences, neurobiology, biomedical engineering and radiology. Meade also is director of the Center for Advanced Molecular Imaging.

Meade’s research focuses on bioinorganic coordination chemistry and its application, including biological molecular imaging, electron transfer processes and the development of electronic biosensors for the detection of DNA and proteins. He has founded four biotech companies — Clinical Micro Sensors, Metaprobe, PreDx and Ohmx — that are developing handheld devices for protein and DNA detection and bioactivated magnetic resonance contrast agents for in vivo imaging of cancer.

He founded Naurex, Inc., an Evanston-based drug discovery company that develops therapies for difficult-to-treat depression and other central nervous system diseases. Naurex was acquired by Allergen, Inc. for $1.7 billion in 2015. Today, Moskal is the co-founder of Aptinyx, Inc., which has a lead compound in phase one clinical trials. It is aiming at the areas of pain, post-traumatic stress disorder and traumatic brain injury for therapeutic development.

The academic inventors and innovators elected to the rank of NAI Fellow are named inventors on U.S. patents and were nominated by their peers for outstanding contributions to innovation in areas such as patents and licensing, innovative discovery and technology, significant impact on society and support and enhancement of innovation.