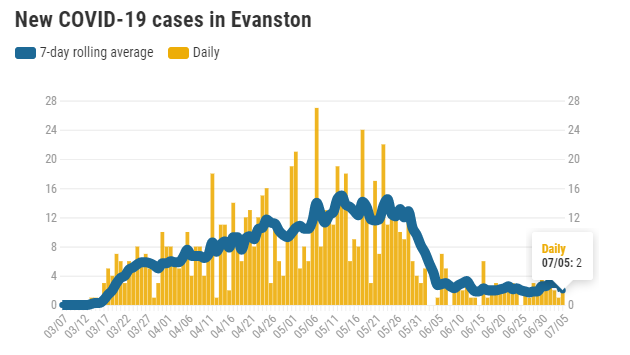 Evanston health officials reported two new COVID-19 cases in the city today, raising the case count to 803, but no additional deaths were reported, leaving the death toll at 70.

Chicago reported 156 new cases, its smallest increase in more than two weeks. That brought its total to 53,531. Chicago also reported three more deaths, for a total of 2,634.

Across Illinois there were 639 more COVID-19 cases, the smallest increase in nearly two weeks, raising the total to 147,251. There also were six additional deaths, raising the fatality toll to 7,020.

Nearly 2% of Chicago residents and nearly 1.1% of Evanston residents now have been diagnosed with the disease.