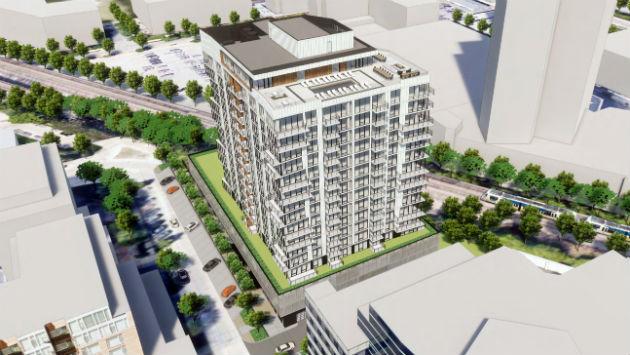 Evanston aldermen tonight are scheduled to vote on whether to give final approval to two planned development projects — one downtown, the other on Howard Street.

The downtown proposal is for property at 1727 Oak Ave., on a triangular lot just west of the Metra tracks.

The plans from the Trammell Crow Company call for a 17-story, age-restricted, multi-family rental development with 169 units and 136 parking spaces.

The property is located in the D3 downtown core zoning district.

An aerial view of the planned structure, at 176 feet, with heights of nearby buildings also noted.

The city staff and the Plan Commission are both recommending approval of the project.

The site previously was a parking lot for the adjacent office building at 1007 Church St.

A rendering of the 100 Chicago Ave. building.

The other planned development up for approval tonight is a five-story project planned for the northwest corner of the intersection of Howard Street and Chicago Avenue.

This project is also adjacent to the Metra tracks, and developer Evanston Gateway, LLC is proposing a mixed-use building with a City Grange garden center on the ground floor and 26 dwelling units on the upper floors.

The site is now occupied by a city-owned parking lot and vacant commercial property formerly used as an auto repair shop.