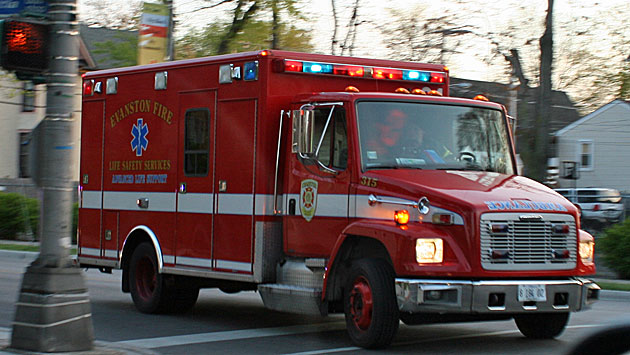 Two men were shot  on Lyons Street near Dodge Avenue in Evanston shortly after 7 p.m. this evening

Police Chief Richard Eddington says the two victims, both young men, reportedly got into an argument with a third man that escalated into the shooting near 1823 Lyons.

After being shot one of the victims managed to run nearly two blocks to 1621 Dodge. 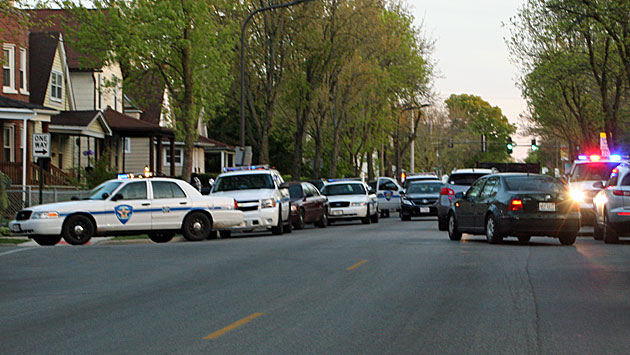 Top: A Fire Department ambulance transporting one of the schooting victims rounds the corner at Emerson Street and Dodge Avenue. Above: Police cars clustered on Dodge at Lyons Street, near the shooting scene.

Both victims were taken by ambulance to Evanston Hospital.

The gunman, who reportedly was armed with a black semi-automatic handgun, was described by one witness as a black male, about 25-years-old and 5-foot-4 to 5-foot-8-inches tall. He was said to have driven off in a white Ford Explorer.

Update 10:40 a.m. 4/23/12: Evanston police this morning say they have identified a suspect in the shooting although the suspect is not yet in custody.

One of the victims, a 20-year-old Evanston resident, was shot in the back and is reported in fair condition at Evanston Hospital after undergoing emergency surgery last night.

The other, a 21-year-old Des Plaines resident who managed to run from the scene despite being shot in the knee, was reported in good condition.