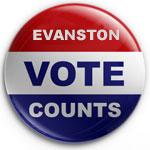 Democratic candidates for congress and the state legislature in districts including Evanston racked up victory margins in the range of two-to-one Tuesday night — but there were some notable differences.

The weakest performance was turned in by State Rep. Robyn Gabel, seeking her second term in office.

Against a last-minute Republican opponent, Eric Lieberman, who'd raised hardly any money for his campaign, Gabel managed to pull in just 63 percent of the vote in the Evanston-based 18th State House District.

By comparison, newcomer Laura Fine, running in the somewhat more conservative 17th Distirct to the west, got 66 percent of the vote against another first-time candidate, Kyle Frank.

Fine did far better in her race than Daniel Biss had in winning election to the seat two years earlier, though the redistricting plan adopted by the Democrat-controlled state legislature may have eased her path to victory.

Biss, in moving up to the state senate, managed to top both his Springfield colleagues, winning 67 percent of the vote to 33 percent for Glenn Farkas, a Glenview Republican making his first race.

All three of the seats in Springfield now represent only suburban voters, losing any Chicago precincts they previously had in the redistricting process.

But Schakowsky racked up her biggest margin — 80 percent — in the Chicago portion of the district.

In a head-to head comparison of popularity among suburban voters, she did worse than the other Democrats on the Evanston ballot — taking just 60 percent of the vote.

Precinct-level vote totals that would permit more fine-grained analysis of the results aren't expected to be available until later this week.