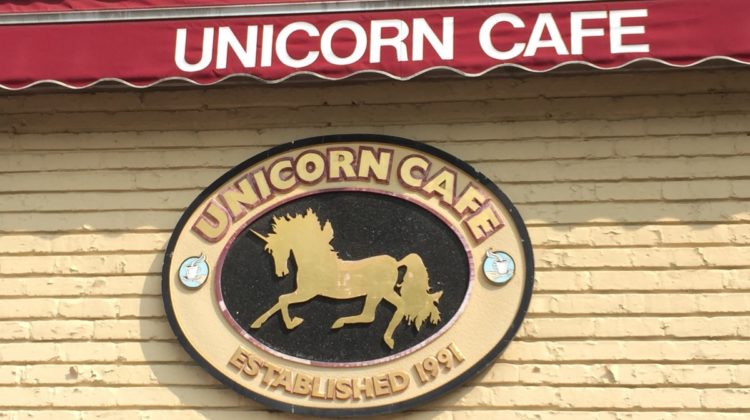 Two of Evanston’s more popular and visible restaurants have closed, leaving more vacant space downtown, and fewer choices for dining or for just a cup of coffee.

The Unicorn Cafe, a fixture on Sherman Avenue since 1991, has shut its doors. “This is a disappointing loss considering how long Unicorn Cafe has served downtown Evanston” said Paul Zalmezak, the City’s Economic Development Manager.

Closing after seven years, La Macchina Ristorante, an Italian restaurant on Orrington Avenue. Annie Coakley, executive director of the marketing organization Downtown Evanston, said, “We are saddened to see this restaurant close its doors. The new owner, Emanuele, was extremely passionate about the restaurant, their service and the Italian dishes he was providing to the neighborhood.”

Zalmezak said the COVID-19 pandemic, which has forced more than 30 business closings in Evanston, was one of several factors in leading to the end of the Unicorn. He says the cafe, a locally-owned business, was even able to compete with Starbucks across the street, and was a favorite with professors and grad students who preferred the “high quality/independent coffee shop experience.”

And Unicorn almost survived, COVID and all. Owner Jessica Donnelly told Evanston Now that “a deal was in the works with another long-standing Evanston business” to save the Unicorn, and keep the cafe as it was.

The Unicorn had closed briefly, but Donnelly said she expected it would re-open this week, until “the plug was pulled at the 23rd hour and 59th minute” on the deal, so she had no option but to shut down.

The Unicorn stayed open even at the peak of the COVID crisis. “People made an unbelievable effort to support us,” she said. “We couldn’t have felt more appreciated.”

And actually, you could say the Unicorn will be reborn, although in Chicago. Donnelly said she donated all of the cafe’s tables and chairs to a social service organization in Englewood called IMAN (Inner-City Muslim Action Network), which provides a variety of health and wellness programs.

Donnelly said once the pandemic has passed, IMAN will use the Unicorn’s furnishings to set up a cafe in the financially distressed South Side community.

As for La Macchina, Downtown Evanston’s Coakley said the owner cited a “variety of reasons” for going out of business.

This is the most difficult time facing restaurants in decades, with eateries having to limit the number of indoor diners to help prevent the spread of COVID-19. Plus, many potential customers won’t show up at all for fear of catching the virus.

Coakley said, “We understand that not everyone is in a position to eat out in our restaurants, but if we could have more residents that are, and make a pledge to eat local or order takeout from downtown restaurants, hopefully we won’t see more closings.”

Meanwhile, the City Council this evening was scheduled to approve new liquor licenses for the new Palmhouse event space at 619 Howard St., for Clarke’s Off Campus at 804 Davis St., for Vinissimo at 2120 Central St. and for Few Spirits, 918 Chicago Ave.