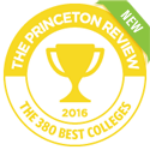 The Princeton Review is out with the 2016 edition of its college rankings list, based on surveys of 136,000 college students, and Evanston — for the second year in a row — is off the list of places where "town-gown relations are strained."

City Manager Wally Bobkiewicz says its the first time in at least nine years that Evanston has managed to stay off the list for more than a single year.

On the other hand, among the 380 schools, including Northwestern University, that Princeton Review ranks, Evanston still hasn't made the list of places where "town-gown relations are great."