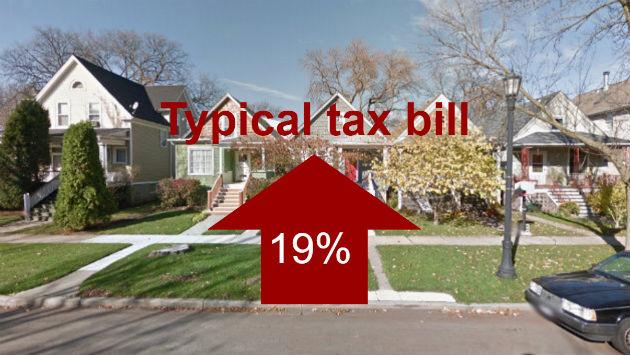 The property tax bill for a typical Evanston homeowner will increase by about 19 percent when second installment tax bills are issued later this summer.

Combined with the 25 percent average increase in property values in last year’s reassessment, a 5 percent increase in the state equalization factor and an unchanged homeowner’s exemption and the net impact is an increase of just over 19 percent.

Of course some assessment increases varied greatly from the 25 percent average and appeals may have reduced assessments for some homeowners, so your actual tax increase is likely to vary significantly from the average figure.

Other agencies whose rates decreased less than the average — indicating significant spending increases — included Cook County, down 3.44 percent; the Metropolitan Water Resources District, down 4.69 percent; the city’s general assistance levy, down 7.89 percent, and the Forest Preserve District, down 8.7 percent.

The biggest tax rate declines — a sign of more modest spending increases — came from Evanston Township High School and the North Shore Mosquito Abatement District, each down more than 16 percent. Three more levies — from Oakton Community College, the City of Evanston and the Evanston Public Library were each down more than 14 percent.

To calculate your tax bill you need to get the current assessed value of your home from the assessor’s office website,

Multiply that by the state equalization factor of 2.8032.

Subtract any exemptions to which you’re entitled. (The most common is the $7,000 homeowner exemption.)

Multiply that by the overall tax rate announced today — which is 9.028 percent for Evanstonians who don’t live in a park district or one of the city’s special service areas.