Evanston’s Next Theatre Company opens its 28th season Thursday with the American premiere of "The U.N. Inspector."

It’s a comedy set in a fictional former Soviet republic whose corrupt rulers mistake a washed up Chicago real estate salesman as the dreaded inspector come to check up on how they’ve used a huge international loan.

The show traces its origins to an 1836 play by Russian author Nikolai Gogol, "The Government Inspector," which has been adapted repeatedly for operas and movies, including a 1949 musical-comedy version starring Danny Kaye.

The current version was written by David Farr for the British stage in 2005, and further adapted for this production by Chicago playwright James Sherman. 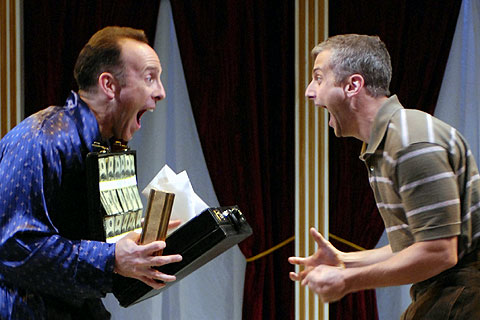 Next’s artistic director,  Jason Loewith, says the temptation to start this year’s season "with a politically-minded play was pretty overwhelming."

Playwright Farr says he is "very interested in the way in which East-West relations are being played out in the ex-Soviet states and the kind of madness going on in those worlds."

In the play he asks whether its realistic for Western powers to rush their brand of democracy on newly-minted governments.