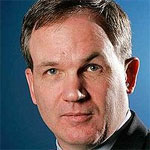 Fitzgerald, 51, has scheduled a news conference for Thursday morning in Chicago. His last day on the job is June 30. It was unclear who will succeed him or if an interim U.S. attorney would be named.

Fitzgerald has been U.S. attorney for the Northern District of Illinois for more than 10 years — the longest-serving U.S. attorney in Chicago's history — and oversaw numerous high-profile investigations, including successful corruption convictions against former governors George Ryan and Rod Blagojevich.

He did not say why he is stepping down or what his plans are. A news release says he "has no future employment plans and will take time off this summer before considering career options."

"When I was selected for this position in 2001, I said that it was one of the greatest opportunities that one could ever hope for, and I believe that even more now after having the privilege of working alongside hundreds of dedicated prosecutors and agents. I have tried not to get in their way," Fitzgerald said in a statement.

"I extend my deepest appreciation to the attorneys and staff for their determined commitment to public service. This was a great office when I arrived, and I have no doubt that it will continue to be a great office."

U.S. Sen. Dick Durbin said Fitzgerald, while being interviewed by Durbin for the U.S. attorney position in Chicago, indicated he would show no political favoritism in his professional duties.

"He kept his word," Durbin said. "His aggressive prosecution of wrongdoing, including politicians in both parties, has given fair warning that no one is above the law."

"He has made Illinois a more ethical state by bringing justice to those who betrayed the public's trust," Quinn said.