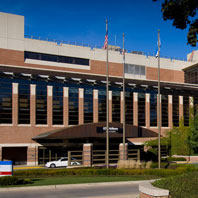 NorthShore University Health System's Evanston Hospital ranks fifth in Illinois and in the Chicago metro area in a new nationwide ranking of hospitals by U.S. News.

Evanston's St. Francis Hospital placed in a tie for 19th in the metro area and was listed 23rd in the state in the report.

The study looked at 121 hospitals in the metro area and 220 across the state.

The study says Evanston Hospital is nationally ranked in gastroenterology and gynecology and rated "high performing" in nine other specialties. It has 743 beds and admitted 42,297 paients during the most recent year for which data is available.

St. Francis was listed as "high performing" in five specialty areas. It has 244 beds and admitted 8,483 patients in the most recent year.

It was nationally ranked in 12 specialies and listed at high performing in an additional one. It has 854 beds and had 52,602 admissions.

Top: Evanston Hospital, in a photo from the hospital website.