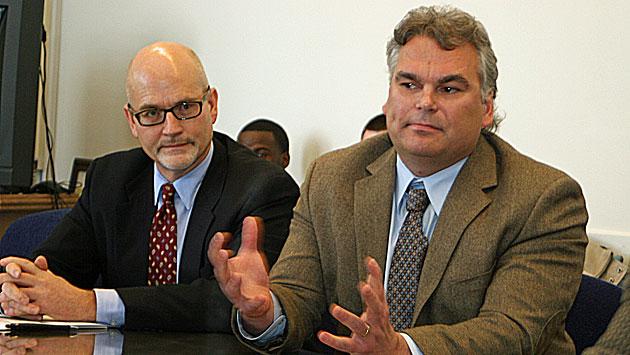 The reputation of The Keg of Evanston may finally be catching up with it.

The city’s Liquor Control Board this morning heard that 17 people were arrested for underage drinking at the bar on Jan. 6, and that the very next night police were able to make three more arrests there for the same offense.

Board members unanimously agreed the problem at the bar at 810 Grove St. is nothing new.

“The word is out,” board member Dick Peach said, “that The Keg is the place to go if you’re under age.” 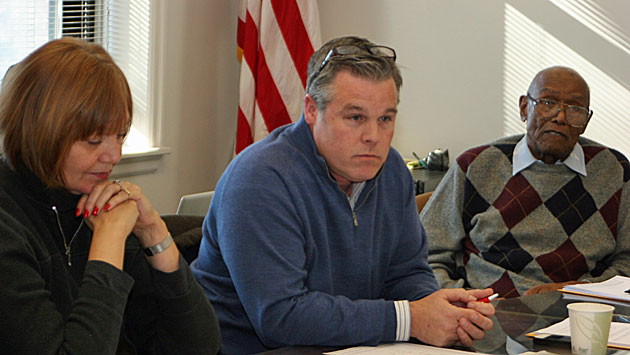 Board member Patrick Hughes told bar owner Tom Migon, “High school kids from as far away as Lake Bluff and Highland Park drive to Evanston knowing there’s a good chance they’re going to be able to get into your place.”

And Mayor Elizabeth Tisdahl said, “There are plenty of other bars along the way, but they come to The Keg.”

City attorney Grant Farrar placed in evidence screen shots from a Twitter account in the bar’s name that he said promoted underage drinking there as well as reviews from Yelp that suggest no one over 21 would to visit the place. “Dark, dirty and borderline disgusting,” was one typical comment.

Migon and his attorney, Todd Stephens, claimed to have never heard about the Twitter account and said they had no control over what someone might write about the bar on Yelp.

While the hearing was underway whoever does control the Twitter account posted a message saying it was unaffiliated with the bar, and shortly thereafter the account was deleted.

Stephens said the bar requires patrons to show two forms of identification and complained that fake ID cards produced in China are now available for a little as $75 and are very hard to detect. 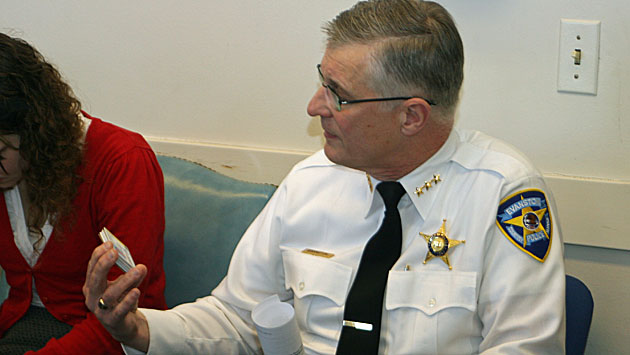 Chief Eddington looks at fake ID cards presented to him by Stephens.

But Police Chief Richard Eddington said the multiple ID requirement was meaningless — because the bar accepts credit cards or similar items that provide no photo and no proof of age as the second ID.

Eddington said The Keg is unique among Evanston bars.

“The rest of the establishments are checked periodically, and we’ve never had this type of volume of problems in other establishments,” Eddington said.

Stephens offered to turn over to police computer hard drives with images the bar captures of IDs that patrons provide, but Eddington said he had “no interest in devoting public resources for what you should be doing to police your own business.”

Mayor Elizabeth Tisdahl ordered the bar closed for two days in 2010 after an underage patron who’d been drinking was injured in a fight at the bar.

And in June 2005, then mayor Lorraine Morton suspended The Keg’s liquor license for seven days after 22-year-old Robert Gresham of Evanston was shot and killed inside the bar. Antoine Hill, of 1716 Payne St., who was 19 at the time of the incident, was later convicted of shooting Gresham and was sentenced to 18 years in prison.

Under the city’s liquor code the mayor could suspend or revoke the bar’s license.

Migon, who has owned the bar for two decades, said late in the hearing, “I’m sweating right now. I’ve got two little girls. This is my livelihood.”

He compared the time since he received notice of the hearing to “like waking up with a cancer in my brain. I’m worried and scared.” 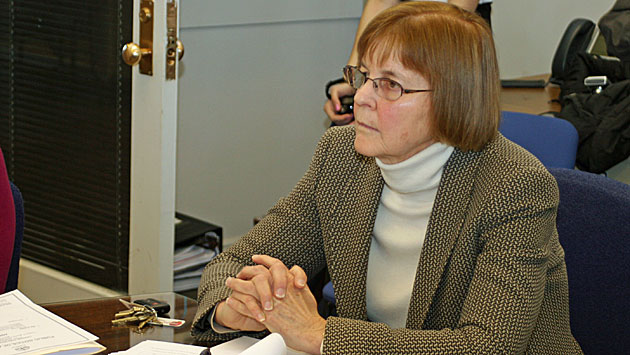 Mayor Elizabeth Tisdahl gets to decide the bar’s fate.

Tisdahl said, “The last thing I want to do is close an Evanston business, but you have to give me some assurance that conditions will change, and I haven’t heard it yet today.”

Tisdahl, who also serves as the city’s liquor commissioner, said she would announce her decision on what to do about the bar by Tuesday.

Excerpt from the Evanston City code

(B) Reuse Of Premises: When any license shall have been revoked for any cause, no license shall be granted to any person for the period of one year thereafter for the conduct of business of selling alcoholic liquor in the premises described in such revoked license.