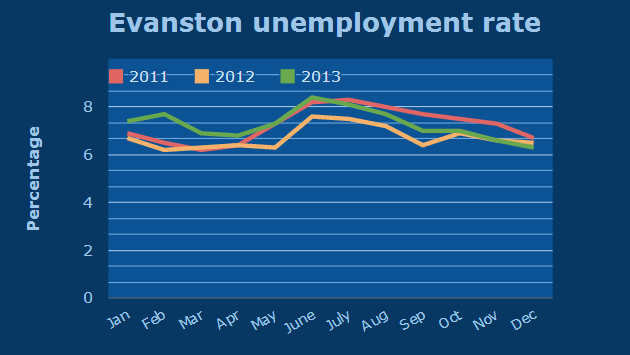 The jobless rate in Evanston fell to 6.3 percent in December — the lowest level here in 19 months.

The Illinois Department of Employment Security says it dropped from a revised level of 6.6 percent in November.

The number of people looking for work fell by 93, but the workforce shrank by 216 people, leaving a net loss of 123 people with jobs in an Evanston workforce that now totals 41,488 people.

A year ago Evanston's jobless rate was 6.5 percent.

Of the roughly 100 communities in Illinois with more than 25,000 residents, 17 had jobless rates lower than Evanston in October — led by Glenview at 5.1 percent rate, Northbrook at 5.4 percent rate and Wilmette at 5.5 percent.