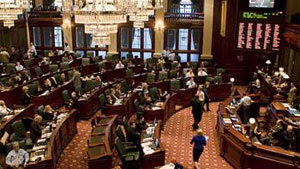 SPRINGFIELD — Lawmakers inked a deal that may save Illinois taxpayers $240 million and businesses $1.6 billion in federal taxes and fines over the course of the next decade.

SPRINGFIELD — Lawmakers inked a deal that may save Illinois taxpayers $240 million and businesses $1.6 billion in federal taxes and fines over the course of the next decade.

The Legislature last week approved allowing the Illinois Department of Employment Security to sell bonds to pay off about $2.4 billion borrowed from the Federal Unemployment Account to keep unemployed Illinoisans’ benefits flowing during the Great Recession.
“It’s probably one of the biggest bills that passed (during the fall veto session),” said state Rep. Frank Mautino, D-Spring Valley, one of the lead architects of the deal negotiated over the summer and into the fall.

Gov. Pat Quinn has said he will sign off on the deal.

Businesses’ usual contributions to the unemployment trust fund, administered by the Illinois Department of Employment Security, will pay for the interest on the bonds instead of money from the state's general revenue fund.

If Illinois doesn’t pay back the remaining $2.4 billion by Jan. 1, it faces $82 million in interest alone for 2012. Mautino says it can sell bonds with an interest rate of about 1 percent as opposed to the 4 percent the federal government would charge on the remaining debt, saving the state $240 million.

He added that the state could sell the bonds at such a low interest rate since interest rates on many other bonds, including U.S. Treasury bonds, are at an all-time low.

Under the state plan, businesses will avoid nearly $1.2 billion in federal penalties and $400 million in increased federal taxes that would stem from the state’s delinquency in paying back the money to the federal government since businesses pay into the trust fund.

“Had we not done this, every business that has a door would have received a notice from the federal government on Jan. 1 that says, ‘Because of the state’s inability to balance this fund, you will see an increase this year,'" Mautino said.

“Businesses need a degree of tax certainty to successfully grow in this economy. This legislation will provide the tax relief to make that happen while making the trust fund solvent,” said David Vite, president of the Illinois Retail Merchants Association, which lobbies on behalf of retail businesses in the state.

The measure also avoids cutting unemployment benefits to cover the interest on the borrowed money this year. However, as part of longer-term unemployment insurance reform, the state will offer benefits for 25 weeks, not 26, starting Jan. 1 to save the state an estimated $50 million annually.

“These reforms will help create vital private-sector jobs, significantly reduce the tax burden on the half of all employers in the state, and ensure the protection of benefits for all working men and women in Illinois who are in need of temporary assistance,” state Rep. Pam Roth, R-Morris, said.

Each state operates its own unemployment trust fund. In Illinois, businesses pay unemployment insurance taxes on the first $12,740 an employee earns. The more employees a business lays off, the higher the percentage of that $12,740 they have to contribute to the trust fund.