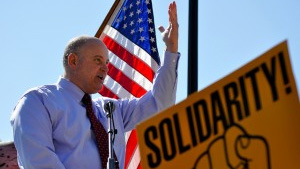 BURR RIDGE —  Illinois’ largest public employee unions don’t want to raise just one tax to pay for the state’s sky-rocketing pension debt, they want to increase as many as they can.

BURR RIDGE —  Illinois’ largest public employee unions don’t want to raise just one tax to pay for the state’s sky-rocketing pension debt, they want to increase as many as they can.

A nearly three hour closed-door pension summit Monday hosted by the We are One Illinois Coalition focused almost exclusively on raising taxes as a way to pay for Illinois’ $130-billion pension debt and nearly $8-billion annual pension payment.

“There was talk of a progressive income tax, talk of broadening of the sales tax, one person talked about taxing retirement income,” said House Republican Leader Tom Cross.

Cross was the only of the four legislative leaders to attend the summit. House Speaker Mike Madigan, the state’s top Democrat, dismissed the unions with a letter last week.

Gov. Pat Quinn did attend the meeting, but left without answering questions.

Mike Carrigan, the president of the Illinois AFL-CIO, said Quinn did not commit to a guarantee that unions would have a seat at the table for pension reform negotiations this year.

“Our group was appreciative that he came and the amount of time that he spent," Carrigan said. “But we asked for an agreed process going forward and we didn’t get a clear answer on that.”

A union coalition used an “agreed process” a few years ago to hammer out landmark education reforms, but that appears unlikely for pension reform.

Cross said he did not hear anything, either from Quinn or the unions that he would be willing to ask his Republican caucus to vote for this spring.

But the talk of taxes has found a receptive audience among Democrats in the Illinois Senate.

State Sen. Mike Noland, D-Elgin, was the point man for the Democrats.

“Revenue, I would say, definitely has to be discussed,” Noland said.

Democrats in Springfield pushed through a “temporary” income tax on people and businesses in 2011, but that tax is set to expire on the first day of 2015. Noland said, the pension crisis may trump the need to let the “temporary” tax fade away.

Noland said the “temporary” tax would not be made permanent. Rather, he said, lawmakers would extend the tax for 15 to 30 years, or until Illinois paid off its $130 billion pension debt.

“Sometime you have to fight fire with fire, and these are large fires,” Noland said. “And the only way to put them out is with big ideas.”

Neither Carrigan nor anyone else from the unions wanted to talk about the specifics of which taxes they want to raise. But the We Are One Illinois Coalition has said for months that Illinois’ pension crisis is not a benefit problem, it is a revenue problem.

Carrigan said he’d rather wait and see what the next few weeks bring.

Illinois lawmakers have been warned by bond houses that they have until the end of the spring session to deliver pension reform, or face further credit downgrades.