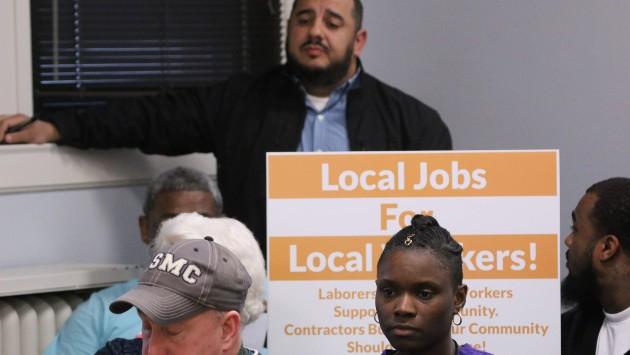 About a dozen union construction workers showed up at Wednesday’s Design and Project Review Committee meeting to object to the hiring practices of a developer seeking approval for a project in Evanston.

Meador’s GLPE, LLC, the entity applying for approval of the Evanston project, shares office space at 1259 W. Madison St. in Chicago with Michigan Avenue Real Estate Group, a firm through which Meador, along with Chicago White Sox and Chicago Bulls Chairman Jerry Reinsdorf and their partner Robert Judelson, have long been involved in development projects in the Chicago region.

The construction worker unions claim that Michigan Avenue and the general contractor it hires, Vifify Construction, violate wage laws and have engaged in negligent practices causing serious injuries to workers.

Worker Jonathan Costello said he’d moved to Evanston recently from the south side of Chicago, in part because he believed Evanston was a union-friendly town.

He said construction unions offer valuable safety education programs that help keep workers safe and that he’d had unfortunate experiences in the past working on non-union jobs.

He said he said that if people read about the track record of this contractor, “you’re going to read a lot of problems about them.”

Meador did not respond to the workers’ comments at the meeting.

Community Development Director Johanna Leonard said the DAPR committee doesn’t make final decisions about development projects and that the workers’ complaints would be better placed at a City Council meeting — since the Council is the ultimate deciding body.

An updated rendering of the 1555 Ridge building presented at the DAPR meeting.

Turning to aspects of the building’s design, Carlos Ruiz, the city’s preservation coordinator, criticized the vertical brick columns between the balconies along with building features. “I see too many of those in some Chicago neighborhoods,” Ruiz said. He suggested the developer should come up with a more unique design that would be more sympathetic to what’s typical in Evanston.

Wednesday’s session was the third DAPR meeting at which the 1555 Ridge project was discussed, and after reviewing a variety of details about the design, the committee voted to advance the project to the Plan Commission without a recommendation.