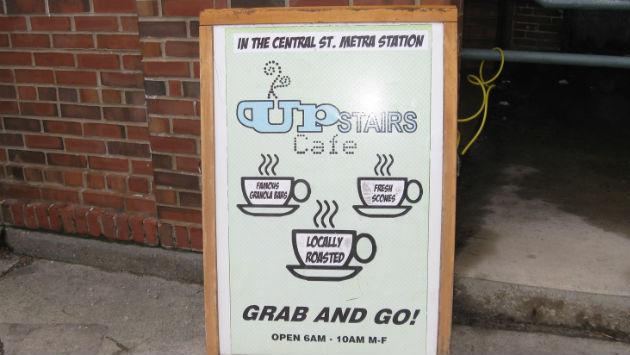 Customers at the Upstairs Café at Evanston’s Central Street Metra station have launched an email and telephone campaign to persuade Union Pacific Railroad to let them stay in business.

The popular eatery that serves as much as a community information exchange as it does a site to purchase coffee and freshly baked scones before boarding a train downtown, has been told by the railroad to relinquish their space by the end of April.

The business is owned and operated by three Evanston mothers—Gail Doeff, Elizabeth Hubbard, and Shelley Patterson—who take turns serving customers and talking to them about community affairs. 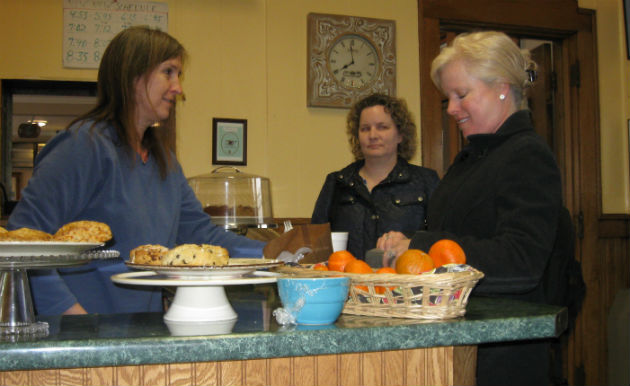 Wednesday morning, Evanston Now found them in conversation with mayoral candidate Steve Hagerty, who, along with Seventh Ward Alderman Eleanor Revelle, is trying to help them stay in business.

“I think it is very shortsighted of Union Pacific to terminate the lease of a business that provides a service so valued by the commuters,” said Ald. Revelle when contacted by Evanston Now.

For the past 20 years, Doeff said, the city has leased the space for a dollar a year and has subleased it to the three women, who took over the space from Mary Lou Smith, owner of Top of the Tracks, when she retired in October of 2012.

Their current problem arose when the city’s 20-year lease expired last year and corporate officials at the railway assumed control, the women said.

Two of the three owners are on duty every morning during the work week on a rotating basis to serve riders from 6 a.m. until 10 a.m., with coffee and baked goods among their most popular products.

They say it is hard to imagine a business better suited for that space and were surprised that the railroad did not at least make them an offer.

They are hoping their customers will send emails to UP’s assistant vice president for public affairs, Liisa Stark, at llstark@up.com, and put in a good word for them.

A company spokesperson, responding to an inquiry, said “we are currently in the process of identifying the best and most effective use of the space at Central Street Station.
We remain in close contact with the occupant of the space to ensure a smooth transition.”