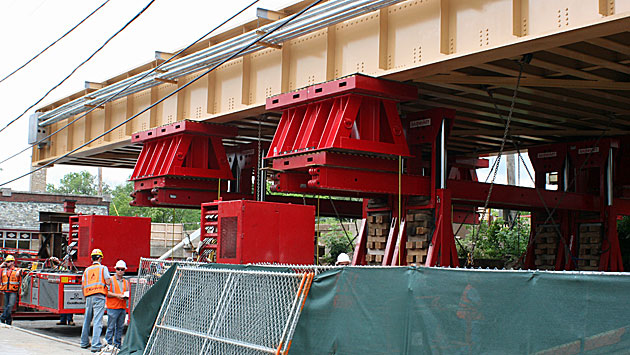 The Chicago Transit Authority stages a double-header in Evanston this weekend — rolling in two new Purple Line viaducts — at Dempster and Grove streets.

The performance follows the successful roll-in of the Greenleaf Street viaduct two weeks ago.

'The project will require shutting down Purple Line service from Howard to Davis from 8:30 p.m. today through 4:30 a.m. Monday. CTA buses will provide shuttle service between Howard and Davis and make stops near each of the affectd stations.

The actual roll-ins will happen Saturday — between 2 and 4 p.m. at Dempster and between 6 and 8 p.m. at Grove.

The city plans to have a live webcam view available of the work on Grove.

The $15 million project to replace the three century-old viaducts is intended to reduce slow zones and improve travel times on the Purple Line.

Top: Work continued Thursday on the new Dempster viaduct, which was assembled on Sherman Place ahead of its scheduled weekend roll-in.