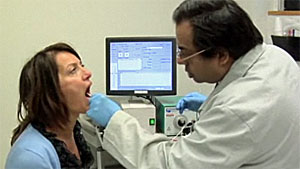 Researchers at Northwestern University and NorthShore University HealthSystem are testing new techniques for the early detection of cancer, and their work is featured in a new video from the National Science Foundation.

“Early detection is probably the only way for us to win the war against cancer,” says Northwestern University’s Vadim Backman in the video.

Backman has been developing a suite of novel optics technologies with the goal of making early detection cheaper, more accurate and less invasive for an array of cancers. His longtime collaborator, Hemant K. Roy, M.D., of NorthShore University HealthSystem, has been leading clinical trials at Evanston Hospital testing the technologies on colon and lung cancers. The results have been promising.

“With this probe, we’ve probably done a couple of hundred patients. We’re about 90 percent accurate,” Roy says of the technology being used in the lung cancer study. “I think if this works, we could really make a big difference in how we treat patients.”

Backman is professor of biomedical engineering at the McCormick School of Engineering and Applied Science, and Roy is director of gastroenterology research at NorthShore.

Backman’s pioneering approach looks at the tissue structure and composition of cells harvested from areas near organs that could develop malignancies. For example, cheek cells are harvested as a pre-screener for lung cancer, and cells harvested from just inside the rectum can be analyzed for potential colon cancer.

The researchers shine light on the harvested cells and analyze the signals provided by the photons bouncing off different structures within the cells. Highly sensitive forms of microscopy, the technologies can detect even subtle abnormalities that could indicate problems elsewhere in the body. Such prescreening could identify the individuals who would likely benefit from more invasive and expensive tests versus those who don’t need additional tests.